Employees waiting in line were seen glued to their expensive smartphones…

Kaine, who was Hillary Clinton’s vice presidential pick in 2016, made the ridiculous comparison in an interview with MSNBC’s Chris Hayes.

“It’s a cold day in Washington, and it looks like a breadline out of the depression. People standing out waiting in the cold to get their soup or sandwich,” said Kaine, whose voter base is heavily reliant upon well-to-do Northern Virginia federal workers.

Naturally, plenty of people showed-up and waited in line.

But in an on-site Washington Post video, government employees waiting in line were not only well-dressed, but they could be seen laughing and fraternizing, and glued to their expensive smartphones.

In contrast, millions of American families genuinely struggled to find food during the Great Depression.

More than 15 million American workers were unemployed—equivalent to 40 million workers today, or the entire population of California.

The Great Depression also lasted more than a decade, and involved incredible devastation. Children were often forced to leave their homes in search of food, entire regions of the country were covered in makeshift shanty towns, and there were so many homeless people that churches and governmental organizations gave away bread to those on the brink of starvation. 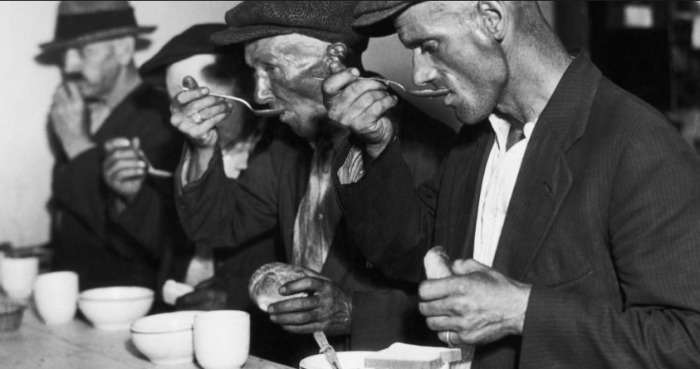 Desperate Americans would wait for hours to receive rations of bread in long lines—which is nothing like what Sen. Kaine shamelessly intimated during his television interview.

In total, the government shutdown has barely surpassed a month.

The average annual federal employee also made more than $115,000 in 2017, and they will all receive full back-pay when the government reopens.

There have been several attempts made by congressional Republicans to reopen the government—including a bill to pay federal workers until border security issues are resolved—but the proposals have been voted down by Democrats, including Kaine, in an attempt to publicly damage the president.

In one Washington Post interview, a federal employee unconvincingly echoes the narrative of widespread struggle.

“My roommate and I both work for the government,” she said, while waiting in the buffet line.

“So, we sort of have all this time, and we want to do things, and take advantage of sort of a forced vacation a little bit, but at the same time it’s a real struggle,” she said.

Her roommate then chimed in: “We are not on the forefront of struggling financially. We’ve got savings, but it can’t go on much longer because it’s not going to be easy for us,” she said.

In a CNBC interview, Mook said his gourmet World Central Kitchen usually serves meals to communities devastated by natural disasters, such as hurricanes and wildfires.

Curiously, Mook characterized the partial government shutdown as a new kind of disaster.

“At the end of the day,” he said, “ we are in the midst of a crisis. It may not be a natural disaster, but it’s a man-made disaster.”