‘I have about at least five more years…’ 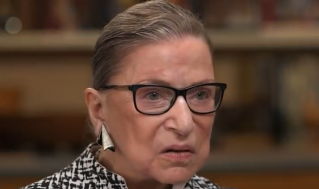 She is recovering at home, a court spokeswoman said.

The justices are set to hear cases on Monday, Tuesday and Wednesday, and a court official said it is likely that the 85-year old justice will not be at the Supreme Court this week.

But Ginsburg said she would participate in the decisions by reading the briefs and the transcript of the oral arguments.

Ginsburg is by far the oldest serving member of the U.S Supreme Court, and according to comments she made in July, she had no intention of resigning anytime soon.

The Bill Clinton-appointee told an audience in New York that she fully intended to stay on the high court until age 90 — or after President Trump’s first term in office concludes.

Her remarks came after a production of “The Originalist,” a play about the late Justice Antonin Scalia.

“My senior colleague, Justice John Paul Stevens, he stepped down when he was 90, so think I have about at least five more years,” Ginsburg said.

Liberals have nervously watched the Ginsburg’s health, fearing that President Trump could get the opportunity to appoint yet another Supreme Court justice.