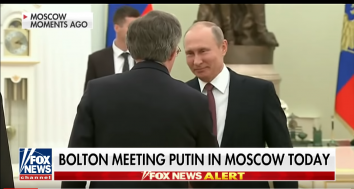 (Theo MERZ, AFP) Moscow – Russian President Vladimir Putin agreed to a summit with Donald Trump in a third country at talks Wednesday with the US leader’s national security advisor, voicing hope for an easing of tensions.

Hawkish US envoy John Bolton was received in Moscow with top honours, a lunch hosted by Foreign Minister Sergei Lavrov followed by a markedly courteous meeting with Putin at the Kremlin.

US-Russian relations have been strained by disagreement over the Syrian conflict, Russia’s annexation of Crimea, its involvement in eastern Ukraine and allegations of political meddling.

The Kremlin’s top foreign policy aide said Putin and Bolton agreed that the two presidents would meet at a place and time to be announced on Thursday.

“Your visit to Moscow gives us hope that we can at least take the first step to reviving full-blown ties between our states,” Putin told Bolton at the Kremlin after the two smiled and shook hands for the cameras.

“We never sought confrontation,” Putin said, adding he regretted that Russia-US ties were not “on top form.”

Bolton, previously known for his hawkish reputation and tough stance on Moscow, said it was important to keep talking and complimented Putin on his handling of the football World Cup, currently taking place in Russia.

“Even in earlier days when our countries had differences our leaders and their advisors met and I think that was good for both countries, good for stability in the world and President Trump feels very strongly on that subject,” he said.

Recently, ties have been strained by a probe into alleged Russian meddling in the 2016 US presidential election and suspected collusion with the Trump campaign, as well as by the poisoning of a former Russian spy in Britain.

Back in Washington, Trump said he had not yet heard a full report from Bolton about plans for a Putin summit, “but it would look like we will probably be meeting sometime in the not too distant future.

Some Trump critics in Washington has expressed concern that, in his eagerness to come back from a summit with a “deal”, Trump might concede too much to Putin without getting much in return.

But Secretary of State Mike Pompeo told US lawmakers on Wednesday that Washington regards Russia’s annexation of Crimea, intervention in Ukraine and partial occupation of Georgia as entirely illegal.

And he said he was sure that when Trump meets Putin “he will make clear that meddling in our elections is completely unacceptable.”

In Moscow, Bolton told a news conference that the idea that a summit would prove some kind of “nexus between the Trump campaign and the Kremlin” would be “complete nonsense.”

“What must guide his conduct of American foreign policy is the pursuit of American national interests,” Bolton said of Trump “He will do this regardless of political criticism at home.”

Putin’s foreign policy aide Yury Ushakov said the two presidents would focus on relations between their two countries, Syria and nuclear arms control and could adopt a joint statement to help improve ties as well as global security.

“I think (Trump) is going to raise the full range of issues between the two countries,” Bolton said.

He added there were areas for cooperation despite the major points of disagreement.

– Reaching out to Russia –

Since coming to power last year, Trump has sought to improve relations with Putin amid tensions between Moscow and the West.

Trump said this month that Russia should be re-admitted to the G7 group of industrialised democracies, from which it was suspended for its annexation of Crimea in 2014.

That comment came at a summit which ended in sharp disagreement between Trump and his G7 allies.

The last, brief meeting between Putin and Trump took place in November 2017 in Vietnam during an APEC summit.

Trump is due to participate in the July 11 and 12 NATO summit in Brussels before heading to Britain to meet with Prime Minister Theresa May and Queen Elizabeth II on July 13.

Kremlin-connected analyst Fyodor Lukyanov said the summit would be a milestone of sorts given the dismal state of ties but stressed that any breakthroughs would be unlikely.

“The question is about finding some new approaches because the old ones no longer work,” he told AFP.

Putin is unlikely to make any major concessions on the Ukraine crisis or other sensitive issues, giving Washington little incentive to review its sanctions, observers say.