Well above the result economists expected… 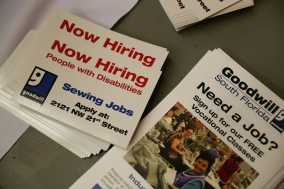 AFP/The US economy had another blockbuster jobs increase, and wages are finally rising as well

(AFP) The United States had another giant month of job creation in April, with strong hiring in the vast services sector, and unemployment falling to a level not seen since 1969, the government reported Friday.

The blockbuster report will help allay fears of a slowing economy and cheer President Donald Trump as he seeks reelection next year.

“It’s only natural that when the overall direction of economic policy favors more freedom, the economy grows,” said John Tamny, director of the Center for Economic Freedom at free-market grassroots group FreedomWorks. “As a result, more people are lured from the sidelines into work.”

As the second quarter began, employers scooped up workers in construction, health care, computer systems design, administrative support and other service industries, adding a total of 263,000 net new positions for the month, the data showed.

That was well above the result economists expected, and worker pay continued to climb, according to the closely-watch report from the Labor Department.

The jobless rate fell two tenths to 3.6 percent but the decline was in part because the pool of workers shrank and fewer people were looking for jobs, pulling them out of the labor force.

Compared to March, however, the increase in pay was only 0.2 percent, shy of forecasts.

But hiring in the manufacturing sector was a weak spot for the third straight month, ending last year’s long hiring streak. Durable goods employment was flat and the auto sector continuing to shed jobs.

In the 12 months prior to February, the manufacturing sector had added an average of 22,000 jobs a month, according to the report.

Hiring in mining, which includes oil and gas, as well as utilities was little changed, the data showed.

Nevertheless, April’s brisk hiring pace should further dim hopes among investors that the Federal Reserve will feel pressure to cut interest rates in the near term.

As unemployment falls to half-century lows and workers become scarce, the continued strength of hiring has confounded predictions that companies would soon run out of people to hire, even as firms nationwide for months have complained they are struggling to fill open positions

And inflation has for several years defied the usual logic that low unemployment would cause wages and prices to rise.

Opinion is now divided among economists as to whether inflation later this year will at last spring to life and pressure the central bank to bump up lending rates — the opposite of Trump’s very loud demand for a drastic interest rate cut.