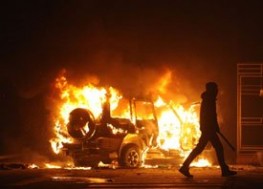 Antifa and BLM-organized rioting, looting, violence, and mayhem have pushed cities across the country into pandemonium. Even if the insurrections are soon quelled – as President Donald Trump promised to do in a speech in front of the White House on Monday – the consequences won’t soon go away.

Some epidemiologists seized on the protests to predict a spike in the spread of the coronavirus due to the gathering of large crowds. They claim the “flattened” curve could begin to steepen all over again.

The “experts” may be wrong, as they have often been during this outbreak. The nationwide lockdowns and social distancing rules (beyond isolating the infected and protecting vulnerable populations such as those in nursing homes) may prove to have been “overkill.”

The response to pandemic fears, including and especially the economic consequences, certainly contributed to driving some people over the edge. Pent up stress, frustration, boredom, alienation, fear, and other symptoms of cabin fever created the potential for a social conflagration.

Jeremy Boreing of the Daily Wire suggests that social chaos erupted in an 8-step process:

The “match” was the death of a suspect named George Floyd. He had fentanyl and other drugs in his system and may have been charged with a relatively minor crime. A police officer appeared to use excessive force in pinning him down. Clearly, Floyd’s death and the police actions that led to it deserved to be investigated.

But the establishment media decided, without evidence of racial bias by the officer – and in contradiction to evidence that shows black arrestees are actually less likely to be killed by white cops – to make Floyd’s death all about the incendiary issue of race. Time will tell if race played a role, but most agree the video evidence show the officer in the wrong.

And so the fire was lit.

The American Institute for Economic Research notes, “Many of the overly confident planners who hatched this disaster are hunkered down in hiding. People are unlikely ever to hold the mainstream media in high regard.”

Sowing the seeds of hatred and whipping up already anxious populations into a frenzy over a fabricated narrative (“racism”) of a single person’s death means many more lives that should have mattered will now be lost to senseless violence.

The article concludes pessimistically, “The best laid plans: inspired by myopic modelers, eschewing of expert opinions of dissident scientists, disregarding of essential rights, fueled by media fabrications and irresponsibility, imposed by governments at all levels. It’s a new chapter of The Road to Serfdom.”

Some economists are predicting a death blow to small businesses that were already under unprecedented financial strain. If they weren’t ransacked, looted, and destroyed by hooligans, they will feel the macro effects of urban decline and flight, plummeting consumer confidence, falling property values, and worsening budgetary crises for state and local governments.

But don’t worry, Walmart, Amazon, Google, JPMorgan Chase, and all their close friends in Washington, D.C. will be just fine. In the event that any “too big to fail” entity runs into trouble, it will get bailed out by the Federal Reserve.

The demands for bailouts going forward will only accelerate. Lockdown relief is still being dispensed, and soon “riot relief” will come too.

The currency crisis will also come – perhaps later this year, perhaps further out in time.

Admittedly, most of us in the sound money camp have been surprised at how resilient the Federal Reserve Note has been for so long. But the world’s primary reserve currency has never had to weather a storm quite like the one we are in now.

If you don’t own hard money (gold and silver) now, what are you waiting for? In the post-apocalyptic America that we seem to be heading toward, precious metals may be one of the only things you can count on. 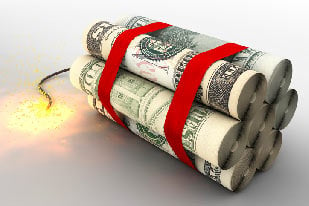 Stock up on gold and silver, guns and ammunition, and non-perishable foods plus household essentials while you still can!

When the social fabric unravels, being self-reliant becomes absolutely essential. Calling 9-1-1 during an emergency may not do much good if the police, fire departments, and ambulances are all overwhelmed.

If you store you precious metals at home rather than a secure depository, a well-concealed fireproof safe to store precious metals will protect them in the event of a home invasion.

Most burglars look for obvious things to grab quickly and then take off to limit their risk of apprehension. A decoy safe with nothing of real value inside that placed out in the open can misdirect a thief’s time and efforts while your real safe is hidden from view (and ideally built into a strong structural element such as concrete).

The same supposed leaders in positions of power who are failing us now can be expected to continue failing. The elites who control the media and both political parties seem to be operating as if wrecking the country is their goal – a point Tucker Carlson powerfully drove home on his Fox News show Monday.