‘An estimated more than 2,000 tons of trash is discarded annually in Arizona’s borderland…’

(Katie J. Read, Liberty Headlines) Illegal immigrants have trashed the California landscape that hugs the Mexican border, and a recent lawsuit levied against the USDA Forest Service seeks to reveal just how drastically the plunder has damaged the land.

The pollution problem, which extends from tons of trash littered in Southern California’s Coronado National Forest to many wildfires sparked by unattended campfires, is not unique to the state that ushered in the nation’s first sanctuary city.

Arizona has been plagued by the environmental destruction caused by the millions of illegal immigrants pouring into the state.

The problem is so widespread, in fact, that the Arizona government has devoted an entire website to documenting the cleanup efforts.

“The collection and disposal of waste in remote areas along Arizona’s 370-mile border with Mexico poses difficult challenges. An estimated more than 2,000 tons of trash is discarded annually in Arizona’s borderland,” the website reads. “A variety of federal and state government entities, Native American tribes and private landowners are affected by the problem, and addressing it requires extensive coordination.”

Arizona’s cleanup efforts began in 2003, according to the Arizona Daily Star.

An estimated 3.2 million people entered the state through the Southern Arizona desert from July 1999 through June 2005 and, in that time, 25 million pounds of trash piled up, making the barren wilderness a literal wasteland.

The trash isn’t just the contents of the normal kitchen bin. 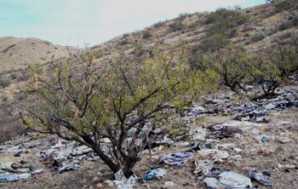 “In the Huachucas (Mountains), you are almost wading through empty gallon water jugs,” Hiking Club President Steve Singkofer told the newspaper. “There’s literally thousands of water jugs, clothes, shoes. You could send 1,000 people out there and they could each pick up a dozen water jugs, and they couldn’t get it all.”

Three years later, the problem had not improved by much.

Tucson Weekly published a feature on Arizona’s trash problem and reported that the border areas were not the only immigrant-made landfills in the state: “A lot of the trash pickup at the Ironwood takes place on trails threading around Silverbell Mine, 75 miles north of the line,” the article reads. 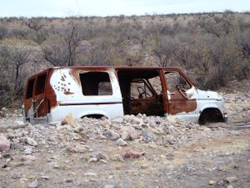 The debris creates many problems besides the fact that it exists in mass proportions.

The articles left by the illegals often carry nonnative seeds to the Sonoran area.

Buffelgrass soaks up water that the desert’s native plants now thirst for.

This same plant also burns quickly — when an immigrant lights a campfire and leaves it unattended, buffelgrass ignites easily and creates a widespread blaze.

The desert has suffered because of it.

“We have preliminary evidence that fire changes the whole structure of desert habitats,” Gary Nabhan, a conservation scientist at University of Arizona, told Tucson Weekly.

“Once a fire moves through, it knocks back the nurse trees (trees that grow quickly and shelter other plants) and permanently alters the desert’s capacity to heal itself.” 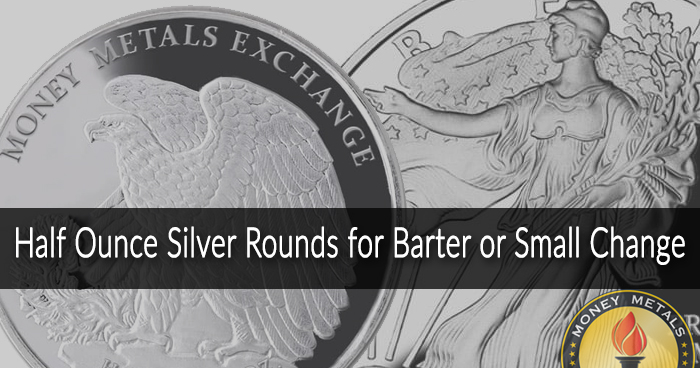 Grab Your Half Ounce Walk Liberty Rounds from MMX Today.

The state began the Border 2020 Program in 2014 and the Arizona-Sonora Environmental Strategic Plan 2017-2021 in 2017 that detailed many initiatives to spur clean up and studies, efforts which required a combined effort from Mexican and American authorities. 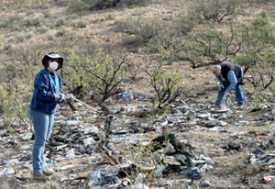 They incorporate many strategies to track the environment’s improvement or further decay.

Even with extensive strategies like these, the case to protect Arizona’s land is still being made.

Andrew Arthur, a resident fellow in law and policy at the Center for Immigration Studies, testified before Subcommittee on Oversight and Investigations in the United States House of Representatives Committee on Natural Resources.

He argued that border control must be allowed in order to ensure environmental protection.

“Cutting the rate of illicit cross-border traffic is critical to protecting these endangered artifacts and environmental treasures,” Arthur said. “Facilitating the law-enforcement activities of the Border Patrol will deter this flow of traffic, and ensure that these federal lands are maintained in their natural state. Any law or regulation that impedes the Border Patrol’s work, but no matter how well-meaning, will thus adversely affect the environment in both the short and long run.”