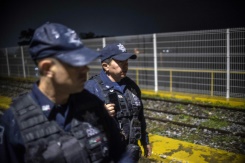 (AFP) Honduran migrants who have made their way through Central America were gathering at Guatemala’s northern border with Mexico on Friday, despite President Donald Trump’s threat to deploy the military to stop them entering the United States.

Various caravans of migrants have been traveling by bus or on foot from their homeland, mostly through Guatemala, in the hope of not just reaching Mexico but heading on to the United States.

“The journey has been very tough, very difficult but there’s no work in Honduras,” said 20-year-old Glenda Salvador, a mother of two toddlers and one of the multitude of Hondurans gathering in a Tecun Uman park close to the bridge crossing from Guatemala to Mexico.

On the other side of the bridge, Mexican riot police could be seen waiting.

“We’re going to wait for those still on their way but who are close by” before trying to cross, Mario Mejia, who seemed to be one of the migrants’ leaders, told AFP.

On Thursday, Trump branded the migrant caravan an “onslaught” and an “assault on our country” in a series of tweets.

He also threatened to send in the US military to “CLOSE OUR SOUTHERN BORDER!” and keep out “MANY CRIMINALS” among the migrants.

He called on Mexico to ensure the migrants do not reach the US border while threatening Guatemala, Honduras and El Salvador with financial penalties.

His comments came ahead of US Secretary of State Mike Pompeo’s visit to Mexico on Friday to meet with outgoing Mexican President Enrique Pena Nieto, with the migrant caravan due to be on the agenda.

Migrants who have already arrived at the Mexican border have been sleeping in churches, fire stations and refugee shelters. Authorities are expecting around 3,000 to arrive in total.