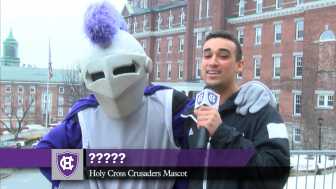 (ToddStarnes.com) The Holy Cross Crusaders are giving its nearly 100-year-old mascot the heave-ho to avoid offending other religious groups.

And by “other religious groups” — well, you can probably figure that out for yourself.

The Jesuit school said they had decided to retire its beloved Knight for the sake of “inter-religious understanding and dialogue.”

“For some, knight imagery alone could convey nobility, chivalry and bravery. However, the visual depiction of a knight, in conjunction with the moniker Crusader, inevitably ties us directly to the reality of the religious wars and the violence of the Crusades. This imagery stands in contrast to our stated values,” College president Philip Boroughs said in a statement.

While they will continue to be known as the Crusaders, the school’s costumed mascot will be replaced with an interlocking H and C on a purple shield.

“While we acknowledge that the Crusades were among the darkest periods in Church history, we choose to associate ourselves with the modern definition of the word crusader, one which is representative of our Catholic, Jesuit identity and our mission and values as an institution and community. We are not simply crusaders, we are Holy Cross Crusaders,” the president said.

The student journalists at Holy Cross were not so forgiving.

They decided to change their name from The Crusader to The Spire.

Anne Murphy, a 1994 graduate of the school, is among the alumni furious at the change.

“My pocketbook is closed,” she said on the Todd Starnes Radio Show. “What is wrong with demonstrating defending the faith?”…Original Source…