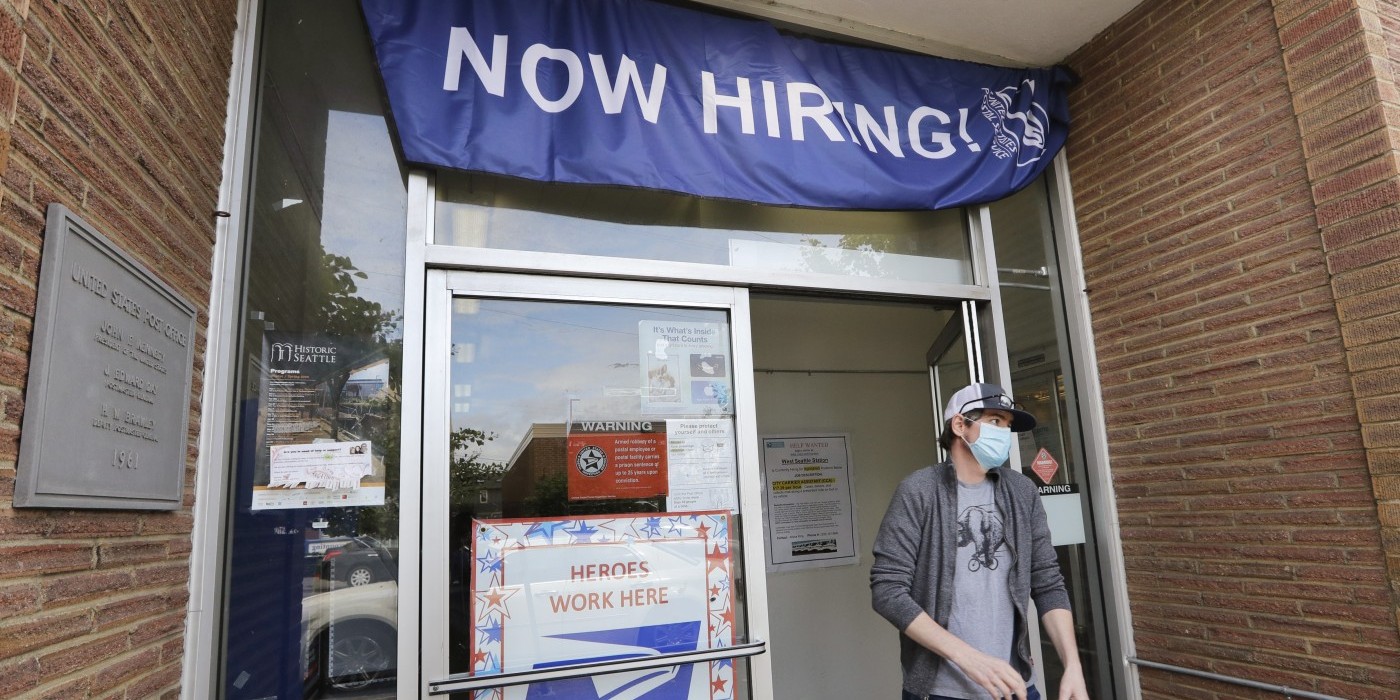 A customer walks out of a U.S. Post Office branch and under a banner advertising a job opening, in Seattle. / PHOTO: Associated Press

(Associated Press) The job market took a big step toward healing in May, though plenty of damage remains, as a record level of hiring followed record layoffs in March and April.

The Labor Department reported Tuesday that the number of available jobs rose sharply as well, but remained far below pre-pandemic levels.

The figures, from the government’s Job Openings and Labor Turnover survey, or JOLTS, illustrate the whiplash the economy has experienced since the pandemic intensified in mid-March.

Layoffs soared in March to a stunning 11.5 million, roughly four times the peak during the 2008-2009 recession. They remained extraordinarily high in April, at 7.7 million, but in May they fell back to pre-pandemic levels of 1.8 million.

Hiring, meanwhile, plunged in April to 4 million, the lowest level since 2011, but jumped to 6.5 million in May. While that is the most hires on records dating back to 2000, it wasn’t nearly enough to offset the roughly 19 million layoffs in March and April.

And whatever ground has been recaptured to this point is now being imperiled by a resurgence of COVID-19 cases throughout the South and West.

Despite a solid rebound in employment, the job market remains badly damaged, both by mandatory lockdowns and the reluctance of people to again visit restaurants, theaters or to travel freely, at least until a vaccine or an effective treatment for the virus is available.

The JOLTS report provides gross totals of hiring and layoffs, while the monthly jobs report, which also includes the unemployment rate, is a net figure of total jobs gained or lost.

On Thursday, the jobs report showed that employers added a net total of 4.8 million jobs in June, after a gain of 2.7 million in May. Even those huge net gains recaptured only one-third of job lost in March and April and the unemployment rate is 11.1%, down from its April and May levels but otherwise higher than at any time since the Depression.

Employers advertised 5.4 million jobs in May, about 10% higher than in April, but still below pre-pandemic levels of about 7 million.