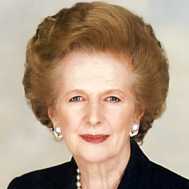 “She doesn’t fit the other part of the definition in our opinion, which really is knocking down other barriers for others and trying to make a positive difference,” said Clinton, who co-wrote “The Book of Gutsy Women: Favorite Stories of Courage and Resilience” with daughter Chelsea, during an interview with BBC radio.

When the host pointed out that Thatcher seemed to fit the description, “even if you didn’t like her,” Clinton said Thatcher’s record was “mixed.”

“But on the criterion we were really looking at: ‘OK what were the positive differences, the changes this person made that really opened the doors to more?’ That wasn’t really that apparent,” Clinton said, noting that Thatcher was “strong” and “clever to mold herself to be more acceptable in terms of everything from hairstyle and speaking style to clothing style.”

Clinton also admitted she’s under “enormous pressure” to run for president again in 2020, but it’s not something she’s interested in at the moment.

“As I say, ‘Never, never, never say never,’” Clinton explained. “But as of this moment, sitting here in this studio talking to you, that is absolutely not my plans.”

Clinton then said she often thinks about “what kind of president” she would have been if she had won in 2016.

“I feel a sense of responsibility partly because, you know, my name was on the ballot. I got more votes, but ended up losing to the current incumbent in the White House, who I think is really undermining our democracy in very fundamental ways,” Clinton said. “And I want to retire him. I want him to be retired.”