To ‘protect the fundamental and unalienable rights of conscience’ for providers…

(Brendan Clarey, Liberty Headlines) The Department of Health and Human Services announced Thursday that it will offer more protections for religious and conscience-based discrimination with the establishment of a new branch of the department.

DHHS announced the creation of a new division in the Office for Civil Rights (OCR) known as the Conscience and Religious Freedom Division.

The new division intends to “restore federal enforcement of our nation’s laws that protect the fundamental and unalienable rights of conscience and religious freedom,” according to a DHHS news release.

The new division operates within the law enforcement arm of DHHS and seeks to protect health care providers who refuse to perform procedures or offer services based on their conscience or religious beliefs.

The division’s website is already up and allows those in the medical field to file a complaint if they were discriminated against for their religion.

The page also details their rights and highlights the laws that protect their liberties. 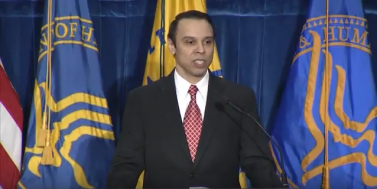 “Laws protecting religious freedom and conscience rights are just empty words on paper if they aren’t enforced,” OCR Director Roger Severino said in the release. “No one should be forced to choose between helping sick people and living by one’s deepest moral or religious convictions, and the new division will help guarantee that victims of unlawful discrimination find justice.

“For too long, governments big and small have treated conscience claims with hostility instead of protection, but change is coming and it begins here and now,” Severino said.

The Acting Secretary of the Department of Health and Human Services, Eric D. Hargan, also commented on the necessity of protecting religious rights and conscience.

“President Trump promised the American people that his administration would vigorously uphold the rights of conscience and religious freedom. That promise is being kept today,” Hargan said. “The Founding Fathers knew that a nation that respects conscience rights is more diverse and more free, and OCR’s new division will help make that vision a reality.”

“The establishment of a Conscience and Religious Freedom Division by the Department of Health and Human Services within its Office for Civil Rights is an historic and positive step by the Trump administration to protect religious freedom and the rights of conscience,” Staver said in a press release about the event. “The Department of Health and Human Services under the Obama administration was hostile to conscience and religious freedom rights. Today’s announcement is refreshing and exciting.”

Other organizations that defend religious freedom are celebrating the announcement made Thursday.

Alliance Defending Freedom is one of those groups, and Kristen Waggoner, Senior Vice President of U.S. Legal Division for the organization, praised the creation of the new division.

“One of the freedoms Americans have cherished most is the freedom to live according to their faith and conscience, free from government coercion,” Waggoner said in a press release. “That freedom is what separates America from so many other nations. For that reason, we commend HHS for creating its new Division on Conscience and Religious Freedom within its Office of Civil Rights.”

Others aren’t as enthused about the announcement, because they are worried that the new protections will allow medical professionals to deny healthcare on moral grounds.

The ACLU denounced the protections as the “administration’s commitment to laws that license discrimination against women, LGBT people, and others,” according to a press release.

“Today’s announcement shows us, once again, that the administration is doubling down on licensing discrimination against women and LGBT people, all in the name of religion,” Louise Melling, deputy legal director of the American Civil Liberties Union, said. “The administration has already shown its hand earlier this year by adopting rules that permit virtually all manner of businesses to refuse to comply with laws providing contraception coverage.”

She went on to say that the new division holds the freedom of religion higher than women’s health.

“We may not know exactly what this new division will look like in practice, but we do know that this means they prioritize religious liberty over the health and civil rights of women, transgender people, and others,” Melling said. “They are prioritizing providers’ beliefs over patients’ health and lives. This administration isn’t increasing freedom — they’re paving the way for discrimination.”