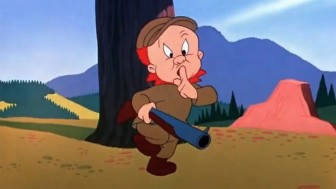 But the entertainment juggernaut adapted the cartoons to fit the company’s anti-gun political agenda, and Elmer Fudd has been stripped of his signature shotgun.

“But we can do cartoony violence — TNT, the Acme stuff. All that was kind of grandfathered in,” he said.

Elmer Fudd was traditionally portrayed as a hapless big-game hunter, armed with a double-barreled shotgun. Now, he’ll hunt Bug Bunny with a toilet plunger, or in some cases, a scythe.

Ironically, Browngardt told the Times that he vowed to keep the original feel of the cartoons because they are “among the greatest cartoons in history.”

“I always thought, ‘What if Warner Bros. had never stopped making ‘Looney Tunes’ cartoons?’” he said. “As much as we possibly could, we treated the production in that way.”

“There was something about the energy of those early cartoons,” Browngardt continued.

The throwback premiered this week on HBO Max, a streaming service that combines shows and movies from the Time Warner entertainment company, which includes HBO, TNT, CNN and Warner Bros. film and television. AT&T bought Time Warner in 2018.

So why get involved in kids’ cartoons?

“I thought it would be fun,” Ryan said.

In the interview, Browngardt stuggled to explain the obvious hypocrisy of banishing guns for political reasons while professing to remain true to the original series. “Looney Tunes” is both timeless and yet not of this time, he said.