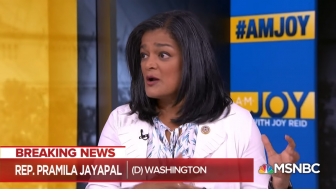 (Lindsey McPherson, CQ-Roll Call) WASHINGTON — House Republican leaders are planning a vote this month on a progressive bill to terminate the Immigration and Customs Enforcement agency, but their plan to put Democrats on record on an issue that divides the minority party looks like it will backfire.

Democrats say they’ll make the debate about families that have been separated at the border — an issue that needs a permanent legislative fix that Republicans do not yet have a solution for that can pass the House.

Rep. Pramila Jayapal, a lead author of legislation known as the Establishing a Humane Immigration Enforcement System Act, said Democrats welcome the vote but know it is a GOP political ploy.

“We’ll all vote ‘no’ on it, and we’ll have a fabulous conversation on the floor that we forced and we’ll make them talk once again about why they’re willing to bring this up but they don’t want to bring up a bill that would fix families being separated and kids being put in cages and ‘Dreamers’ still don’t have any legal status,” the Washington Democrat said.

A vote against against the bill would represent a protest of the GOP’s political game, not the policy, Jayapal said.

The Democrats’ bill, which in addition to Jayapal was introduced by Reps. Mark Pocan of Wisconsin and Adriano Espaillat of New York, would put together a commission to develop a proposal for “a humane immigration enforcement system” that would involve terminating ICE within a year of Congress enacting that new system.

House Majority Leader Kevin McCarthy told reporters Thursday that he’d bring the progressive Democrats’ bill to the floor this month before the chamber adjourns for the August recess.

“We’re going to have a debate about it,” the California Republican said.

Rep. Steve Stivers, chairman of the National Republican Congressional Committee, said it was a “great idea” to have the ICE vote so it’s clear where everyone stands on the issue.

“I think we need to give their agenda a little play time so America knows what they’re about,” the Ohio Republican said.

But Rep. Ben Ray Lujan, chairman of the Democratic Congressional Campaign Committee, wasn’t concerned about the GOP’s attempt to use the vote as a campaign issue.

“I think you’re assuming that the Democratic Caucus isn’t together on this,” the New Mexico Democrat said when asked if he’s worried the vote would reveal a divide within the party.

Lujan said Democrats would be united in using the debate as an opportunity to have a conversation about issues they do agree on but that are likely to be more divisive for Republicans.

“If Republicans choose to bring a bill to the floor, they’re going to have to have a conversation and answer questions to the American people about why they’re ignoring their oversight responsibilities to the inhuman treatment of children and to standing up to this president when it comes to how he treats Dreamers,” Lujan said.

McCarthy was nonchalant when asked if it was hypocritical for Republicans to hold the ICE vote when they have not address the family separation issue.

“Think about what ICE is able to do,” he said. “Look, just in the last year, more than 900 children were saved from human trafficking. Think of the thousands of pounds of drugs of what’s been able to been stopped (by ICE).”

McCarthy also pointed out that not a single Democrat voted for a bill the House voted on in June that included a provision addressing family reunification, as well as several other immigration policies. Those included funding for a wall along the southern border, a path to citizenship for young undocumented immigrants known as Dreamers, and cuts to the diversity visa lottery program and family-based visas.

What McCarthy didn’t mention is that 112 Republicans also voted against that bill, which was supposed to be a compromise among different factions of the GOP. It failed 121-301.

Speaker Paul D. Ryan earlier Thursday had said Democrats on the left “jumped the sharks” in pushing to abolish ICE.

Jayapal thought that was a bit of a stretch.