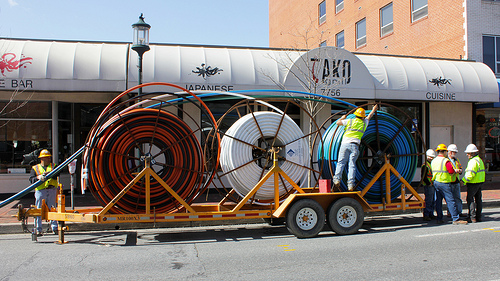 SAWS billed the companies for repairs, receiving $134,810 in compensation for 13 line breaks. Twenty-six other breaks totaling $91,255 in damages remain unpaid.

Five other severed lines dating back to last March remain under investigation by SAWS, the city-owned utility.

With damages still being tallied, total costs are on track to top $250,000.

The city’s contract with Google Fiber internet service – hailed by former Mayor Julian Castro as a giant technological step forward for San Antonio – has proved to be a low-tech headache.

Watchdog reported that the city cut corners in authorizing the installation of “fiber huts” in city parks. Last month, City Manager Sheryl Sculley suspended the installation program to work out the legal kinks.

Google uses a dozen drilling subcontractors to install conduit around the city. Along the way, they’ve disrupted water and sewer service in dozens of neighborhoods.

Some incidents spilled thousands of gallons of water, for which SAWS billed the contractors at discounted rates.

For example, Lopezol Distribution was charged $4.10 for the loss of 1,003 gallons. Spilling 14,400 gallons, Eli Drilling got a $58.80 bill. The bills — which did not include meter fees, sewer fees or stormwater fees — were about 2/3 of the standard residential rate, according to the SAWS rate calculator.

The biggest water loss occurred on Grissom Road last September. There, Google contractors severed a main and released 3,332,240 million gallons. Farmers Insurance paid a $13,606 water bill for the incident, on top of $78,658 in repairs.

“We have seen contractor-caused line breaks spike over the last 18 months due to fiber contractors,” SAWS spokeswoman Anne Hayden told Watchdog.org. “We see this as part of the spike of activity in San Antonio.”

Hayden said the utility expects the “rush of digging for fiber installations will subside over the next year or two.”

“In the meantime, we are working hard to ensure that our customers stay in service and collect for damages to SAWS lines caused by contractors,” she added.

Some of the line breaks occurred on private property, as the city allowed Google drillers to dig on residential lots.