‘Turkey [will] start its operations against the Kurds, and a bloody war will begin…’ 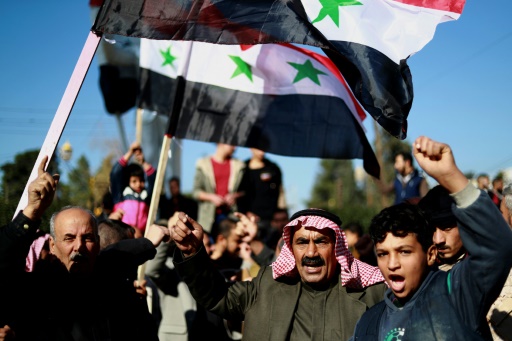 Syrian demonstrators in the northeastern Syrian Kurdish-majority city of Qamishli asking for the Syrian army’s protection as Turkey threatens to carry out a fresh offensive following the US move to withdraw. PHOTO: AFP / Delil SOULEIMAN

(W.G. Dunlop and Maggy Donaldson, AFP) The U.S. military confirmed Sunday that the order to withdraw American troops from Syria had been signed, sending European “allies” and opposition political forces in Washington into a tailspin despite long calling for such a move.

President Donald Trump held talks with his Turkish counterpart to negotiate a pullout after announcing  Wednesday that the roughly 2,000 US troops would leave civil war-racked Syria, where they have been deployed to assist in a multinational fight against the Islamic State jihadist group.

“The execute order for Syria has been signed,” a military spokesperson told AFP on Sunday in response to a query, without providing further details.

Turkey—at odds with Trump over his support for the Saudi Arabian crown prince and growing increasingly aligned recently with Russia and Iran amid a raft of sanctions and trade tariffs—lauded the U.S. withdrawal decision on Syria.

However, some fear that Turkish forces now will now have a freer rein to target Kurdish fighters who were armed and trained by the U.S. and played a major role in the war against IS but are deemed terrorists by Ankara.

Trump and President Recep Tayyip Erdogan spoke by telephone on Sunday and “agreed to ensure coordination between their countries’ military, diplomatic and other officials to avoid a power vacuum that could result following any abuse of the withdrawal and transition phase in Syria,” the Turkish presidency said in a statement.

Trump tweeted that he and Erdogan “discussed [ISIS], our mutual involvement in Syria, & the slow & highly coordinated pullout of U.S. troops from the area.”

White House aides cited by The Washington Post said Trump’s advisors have persuaded him to withdraw the troops more slowly than he would like in order not to jeopardize their safety.

A withdrawal could have extraordinary geopolitical implications, and it runs counter to long-established U.S. policy for the region.

Thousands of ISIS jihadists are thought to remain in Syria, but Trump on Wednesday declared that “we’ve won against ISIS,” using another acronym for the extremists.

Late Sunday he tweeted that Erdogan had assured him that any ISIS fighters remaining will be eliminated.

President @RT_Erdogan of Turkey has very strongly informed me that he will eradicate whatever is left of ISIS in Syria….and he is a man who can do it plus, Turkey is right “next door.” Our troops are coming home!

Repeating a pattern of flattering comments towards global strongmen, Trump added that Erdogan “is a man who can do it.”

Although many on the Left praised similar decisions made by Trump’s predecessor, Barack Obama, who was slow to deploy troops in the fight against ISIS, politicians—including those from Trump’s own Republican party—and international allies now feared the withdrawal was premature and would further destabilize the already devastated region.

A U.S. pullout, said Mutlu Civiroglu, a Kurdish affairs analyst, will open the way “for Turkey to start its operations against the Kurds, and a bloody war will begin.”

French President Emmanuel Macron on Sunday said he “deeply regretted” Trump’s decision, and that “an ally must be reliable.” However, the French have increasingly been unreliable and critical of U.S. led forces in the Middle East.

Israel has been careful to point out that it respects the U.S. decision, but analysts say that beneath those public pronouncements are concerns over whether its main enemy Iran will have a freer hand.

U.S. troops will leave under the auspices of a new Pentagon chief set to start next month, after Jim Mattis resigned from the post citing major differences, including on Syria, with the often-impulsive Trump. 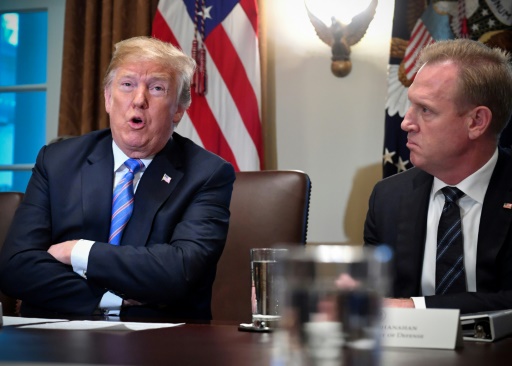 Plans for the troop pullout will now be overseen by Deputy Secretary of Defense Patrick Shanahan, who Trump on Sunday said would replace Mattis starting Jan. 1.

Mattis, 68, had said he would leave at the end of February to allow a smooth transition for the next chief of the Pentagon—but a letter from the Defense secretary that appeared to publicly criticize the administration caused a reportedly angry Trump accelerated his departure by two months.

Unlike Mattis, Shanahan has never served in the military and has spent most of his career in the private sector, including with aircraft giant Boeing.

Until Trump finds a permanent Pentagon chief, Shanahan will lead plans for U.S. troops to leave Syria along with a significant drawdown in Afghanistan, both of which critics worry will leave war-torn regions at risk of continued and potentially heightened bloodshed.

Trump’s sudden decision sparked turmoil within his administration, prompting the resignation of Brett McGurk, the special envoy to the anti-IS coalition, as well as Mattis.

McGurk said he could not support Trump’s Syria decision that “left our coalition partners confused and our fighting partners bewildered.”

Carl Bildt, a former Swedish prime minister and now co-chair of the European Council on Foreign Relations, did not hold back in expressing his displeasure on Twitter.

And now Trump gets rid of SecDef Mattis almost immediately. No smooth transition. No effort at reassurance to allies. Just vindictive. https://t.co/f6eDP2AC80

Nancy Pelosi—who has battled the president over funding of a border wall, which Trump may attempt to cover through the Defense budget—also claimed to be shaken by Mattis’s departure.

However, Trump had signaled the likelihood of Mattis eventually leaving as early as October, saying, “He’s sort of a Democrat.”