As Trump lashed out at Democratic congressman Adam Schiff, suggesting he should be arrested for “treason,” Australia confirmed that the president asked for help with an inquiry into special counsel Robert Mueller’s investigation of Russian meddling in the 2016 election.

Trump also attacked the alleged “whistleblower” whose complaint about his phone call with the leader of Ukraine led to the opening of the impeachment probe in the Democratic-led House of Representatives.

“We are trying to find out about a whistleblower, when you have a whistleblower that reports things that were incorrect,” the president told reporters.

The whistleblower, reportedly a CIA officer, raised concerns about the July phone call that he did not hear, during which Trump asked Ukrainian President Volodymyr Zelensky to investigate former Vice President Joe Biden and his son, Hunter, who served on the board of a Ukrainian gas company at a reported price of $50,000 a month.

Giuliani was at the center of the effort to get Ukraine to conduct a probe of the Bidens.

Schiff, chairman of the Intelligence Committee, and the chairmen of two other Democratic-led House committees issued a subpoena to Giuliani asking him to turn over Ukraine-related documents by October 15.

“The committees are investigating the extent to which President Trump jeopardized national security by pressing Ukraine to interfere with our 2020 election,” the chairmen said in a letter to Giuliani.

“Our inquiry includes an investigation of credible allegations that you acted as an agent of the President in a scheme to advance his personal political interests by abusing the power of the Office of the President,” they said.

Trump said on Monday that the call with Zelensky — which a senior State Department official confirmed was listened to by Secretary of State Mike Pompeo — was “perfect” and the whistleblower “reported a totally different statement.”

Trump criticised Schiff for his depiction of the call during a congressional hearing last week. 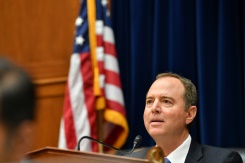 AFP/Adam Schiff, a Democratic lawmaker from California, is heading the impeachment inquiry into President Donald Trump

Schiff deceptively opened the hearing with an imitation of Trump speaking like a mob boss to pressure Zelensky to investigate the Bidens. He later tried to cover for his misrepresentation by dismissing it as a “parody.”

“It bore NO relationship to what I said on the call,” Trump tweeted of Schiff’s remarks. “Arrest for Treason?”

Trump also raised eyebrows by retweeting comments made by a Baptist pastor, Robert Jeffress, to Fox News warning of the dangers of “civil war” if the president was impeached.

“If the Democrats are successful in removing the President from office (which they will never be), it will cause a Civil War like fracture in this Nation from which our Country will never heal,” Trump paraphrased Jeffress as saying.

An Australian government spokesman meanwhile confirmed that Trump asked Prime Minister Scott Morrison to help US Attorney General Bill Barr to gather information for a probe into the Mueller inquiry.

Australia “has always been ready to assist and cooperate with efforts that help shed further light on the matters under investigation,” the spokesman said in a statement.

“The PM confirmed this readiness once again in conversation with the President.”

The Times said the White House restricted access to the transcript of the Trump-Morrison call in a manner similar to what was done with Trump’s call with Zelensky.

The original FBI probe into Russian election meddling — which was taken over by Mueller — was launched after the bureau received a tip from Australian officials.

One new poll out Monday suggested that Americans were split down the middle over whether they support impeachment of the 73-year-old real estate tycoon. If Trump were impeached by a simple majority vote in the 435-member House, he would face a trial in the Republican-led Senate, where a two-thirds majority would be needed to convict and remove him from office.

Few Republican lawmakers have criticized Trump since the Ukraine scandal emerged, but former “NeverTrump” Republican senator Jeff Flake urged them on Monday to speak up.

Adapted from reporting by © Agence France-Presse.