He said he was a young, inexperienced fan of Trump when his application to join the campaign was accepted… 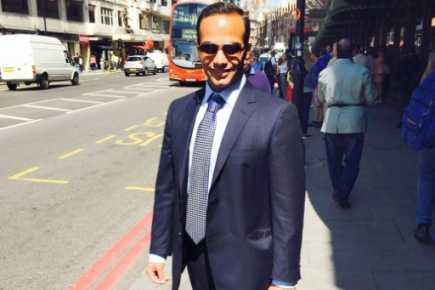 (AFP) The young foreign policy advisor whose London meetings first set off the FBI’s Russian collusion investigation has said Donald Trump was initially enthusiastic about his early 2016 proposal of a meeting with Vladimir Putin.

George Papadopoulos said in a sentencing statement to a Washington federal court late Friday that he was just a naive and star-struck young advisor to Trump when he met supposedly Kremlin-connected Russians in London to discuss a meeting between his boss and the Russian president.

At the first gathering of Trump’s foreign policy team in Washington on March 31, 2016, Papadopoulos, “eager to show his value to the campaign,” told the candidate and his advisors that he had connections that could facilitate such a meeting.

“While some in the room rebuffed George’s offer, Mr. Trump nodded with approval and deferred to Mr. Sessions, who appeared to like the idea and stated that the campaign should look into it,” the statement said, referring to Jeff Sessions, now the attorney general.

Papadopoulos filed the statement ahead of his sentencing for lying when he was first interviewed by the Federal Bureau of Investigation over possible collusion between the Trump campaign and Russians ahead of the November 2016 election.

His meetings with individuals with apparent Russian intelligence ties in 2016 were the initial reason for the FBI launching the collusion investigation, which now has its focus on Trump, his family and top advisors.

In the statement to the court, Papadopoulos admitted he lied to investigators, but asked for a very light sentence, saying he had not sought to obstruct the investigation but only wanted to protect his career path.

He said he was a young, inexperienced fan of Trump when his application to join the campaign was accepted in March 2016.

During his interview for the job with a senior campaign official, “George learned that the campaign’s foreign policy focus would be improving relations with Russia,” the statement said.

“George landed the job despite having no experience with US and Russian diplomacy.”

Weeks later in Europe, Papadopoulos made contacts with a mysterious professor, Joseph Mifsud, who claimed Kremlin links and introduced him to other ostensibly well-connected Russians, including an alleged niece of Putin.

“To say that George was out of his depth would be a gross understatement…. He had no experience in dealing with Russian policy or its officials,” the statement said.

Encouraged by the March 31 foreign policy team gathering, he continued to pursue a Trump-Putin meeting.

At a breakfast on April 26, 2016, Mifsud told Papadopoulos that people in Moscow had “dirt” on Trump’s Democratic rival Hillary Clinton — information Papadopoulos later shared with the campaign.

How the Trump campaign reacted to that and other Russian offers of damaging information on Clinton is now at the heart of the investigation led by Special Counsel Robert Mueller.