(LifeSiteNews) The archbishop now at the helm of the Pontifical Academy for Life paid a homosexual artist to paint a blasphemous homoerotic mural in his cathedral church in 2007. The mural includes an image of the archbishop himself. 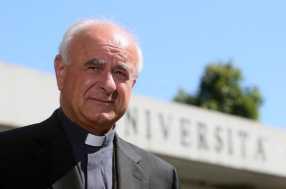 The archbishop, Vincenzo Paglia, was also recently appointed by Pope Francis as president of the Pontifical Pope John Paul II Institute for Studies on Marriage and Family.

Included in one of the nets is Paglia, the then diocesan bishop. The image of the Savior is painted with the face of a local male hairdresser, and his private parts can be seen through his translucent garb.

According to the artist, a homosexual Argentinean named Ricardo Cinalli who is known for his paintings of male bodies, Bishop Paglia selected him out of a list of ten internationally-known artists specifically for the task of painting the inner wall of the facade. Bishop Paglia, along with one Fr. Fabio Leonardis, oversaw every detail of Cinalli’s work, according to Cinalli, who approvingly notes that Paglia never asked him if he believed in the Christian doctrine of salvation.

“Working with him was humanly and professionally fantastic,” Cinalli told the Italian newspaper La Repubblica in March of last year. “Never, in four months, during which we saw each other almost three times each week, did Paglia ever ask me if I believed in salvation. He never placed me in an uncomfortable position.”

“There was no detail that was done freely, at random,” added Cinalli. “Everything was analyzed. Everything was discussed. They never allowed me to work on my own.”…