Federal Reserve is back to spiking the punch bowl… 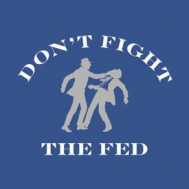 (Clint Siegner, Money Metals News Service) Market forecaster Martin Zweig famously warned investors against underestimating the power of the Federal Reserve Bank to control markets. He coined the phrase “Don’t fight the Fed” back in the 80’s. Precious metals investors are wondering if this is still good advice.

On one hand, it is pretty hard to argue with that bit of wisdom.

The Fed Zweig was referencing had begun taking a more overt role in markets, using interest rates as a tool for managing the economy.

Zweig hailed from an era of less irresponsible central bankers. He expected them to use their immense power in rational ways.

Today he might be disturbed by just how vast the powers of the central bank have become. Officials there recognize no limits on their authority. They buy stocks, spearhead bank bailouts, monetize federal debt, and act as a lender of last resort in the repo markets.

The Fed’s balance sheet exploded to 4 trillion dollars over the past decade. It is stuffed with assets few others wanted to buy; U.S. debt with very low yields, dodgy mortgage securities and who knows what else.

Officials there have unlimited power, but the way they use it undermines – not inspires – confidence. The feeble attempt to normalize interest rates and unload some of the junk on their balance sheet failed a year ago when the stimulus addicted equity markets went into withdrawal.

Past assurances about being able to throttle back when the economy recovered proved to be worthless. They are back to spiking the punch bowl, and investors have to worry about how crazy things will get this time around.

Fed bankers won’t give an honest accounting for their extraordinary intervention in the repo markets, but it smells like trouble. If it spreads, rates will be headed back toward zero.

They talk openly about even more bizarre and extreme policies, including negative interest rates, as tools to combat an economic slowdown.

The power of the Fed isn’t the only consideration when deciding how to invest. It is just as important to think about who wields that power and how well they do it.

For the most part, today’s central bankers lack wisdom or principles. They have Politburo-like arrogance in their ability to centrally plan the economy. And they lack Volcker’s tolerance for pain which explains why the bubbles they blow just keep getting bigger and more dangerous.

Fighting the Fed may be a bad idea.

But so is climbing on board with the people running policy there. We suggest the best plan is to try and get out of their way.