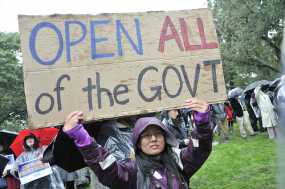 (Kaylee McGhee, Liberty Headlines) A federal employee labor union is suing the federal government for requiring “essential” employees to work without pay during the government shutdown.

The American Federation of Government Employees claimed that the government is violating the Fair Labor Standards Act by forcing employees to work without pay.

Nearly a quarter of government employees are currently working with pay, including Border Patrol and Immigration and Customs Enforcement agents.

About 380,000 federal employees will receive delayed paychecks as the shutdown continues into the new year, according to CNN.

“Our nation’s heroes, AFGE members and their families deserve the decency of knowing when their next paycheck is coming and that they will be paid for their work,” the union’s president, J. David Cox, said in a statement on Monday, calling the demand “inhumane.” “Our intent is to force the government and the administration to make all federal employees whole.”

The partial government shutdown is a result of the Democrats’ refusal to compromise with President Trump and allocate funding for the border wall.

Both sides have refused to give ground and there has been little sign of negotiation.

“The President and his team stayed in Washington over Christmas hoping to negotiate a deal that would stop the dangerous crisis on the border, protect American communities, and re-open the government. The Democrats decided to go home,” White House press secretary Sarah Huckabee Sanders said in a statement on Thursday.

A spokesman for Rep. Nancy Pelosi, D-Calif., who is set to be confirmed Speaker of the House this month, said Democrats have offered the president several deals, but he has rejected each of them.

“Democrats have offered Republicans three options to re-open government that all include funding for strong, sensible, and effective border security — but not the President’s immoral, ineffective and expensive wall,” Pelosi spokesman Drew Hammill wrote in a tweet.

“With the House Majority, Democrats will act swiftly to end the Trump Shutdown, and will fight for a strategic, robust national security policy, including strong and smart border security, and strong support for our servicemembers and veterans,” he said.