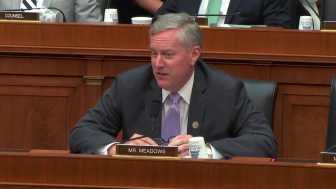 (Joshua Paladino, Liberty Headlines) A House Oversight Committee hearing discussed the impact of the unprecedented rate at which President Barack Obama passed regulations and President Donald Trump has begun to repeal them.

“According to the Federal Registry, agencies issued 3,280 rules last year. This amounts for less than nine new rules per day, including weekends and federal holidays ,” said Rep. Mark Meadows, R-North Carolina. “Now that’s an improvement over the previous Administration where we saw ten and a half rules passed each day in 2016.”

Regulatory growth has slowed under Trump, but the hearing, titled, “Shining Light on the Federal Regulatory Process,” showed that another problem has remained: Regulatory agencies have not followed the Congressional Review Act or the policies prescribed by the Office of Management and Budget.

The hearing focused on the inability or unwillingness of regulatory agencies to comply with rules about “guidance” — the process that they use to show Congress how they will implement new regulations.

The House Oversight Committee defined Regulatory guidance as “an agency’s statement of policy or interpretation of a statute or regulation. These documents can have a significant effect on the public and can alter the behavior of regulated parties.”

As regulatory agencies gained more power to create rules and regulations without the oversight of Congress, President Ronald Reagan signed Executive Order 12291, which required that the OMB review new regulations.

As regulatory oversight faded, so did the guidance of regulatory agencies, according to Noe.

The problem became one of more than sheer number.

The federal government passed a lot of regulations, but more importantly they stopped telling people how to comply with them.

Clinton’s executive order stopped the OMB from reviewing guidance documents, since they didn’t have significant impact, so regulatory agencies stopped issuing them and submitting them to Congress.

The report that arose from the hearing came with three key findings.

Second, regulatory agencies don’t know the legal definition of guidance, so they didn’t know what documents to provide.

Third, regulatory agencies have not submitted the guidance documents to Congress that the Congressional Review Act required them to.

“Of the more than 13,000 guidance documents identified for the Committee, only 189 were
submitted to Congress and the Government Accountability Office (GAO) in accordance with
the CRA,” the report found.

They need to submit guidance documents that the law requires them to.

“When there is a lack of clarity about whether a guidance document should be submitted to Congress and GAO under the CRA, agencies should seek guidance from GAO and Congress,” the report said.

**MORE COVERAGE OF DEREGULATION at LibertyHeadlines.com**

The non-issuance of regulatory guidelines becomes increasingly poor during the end of presidential terms.

Lame duck presidents, especially Clinton, Bush, and Obama, passed two to three times as many regulations during the last few months of their terms than any other part of their tenure.

These lame-duck regulations are rarely submitted to Congress for oversight.

“Agencies reported to the Committee that they had submitted just 189 guidance documents to Congress and the GAO, as it is required by the CRA. That’s a submission rate of less than 0.015 percent,” Meadows said. “GAO will never be able to review the more than 12,800 guidance documents in our limited sample, let alone the entire universe of the agency guidance and there is some sort of disconnect between what the law says and what agencies do.”