JACKSON LEE: ‘Why did your agent not have his hair on fire?…’ 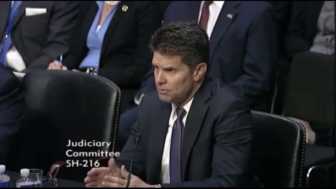 (Kaylee McGhee, Liberty Headlines) FBI Deputy Director David Bowdich testified before the House Judiciary Committee on Tuesday, and said the FBI was the “only agency to blame” for the Parkland shooting on Feb. 14.

The hearing, held by the Crime, Terrorism, Homeland Security, and Investigations Subcommittee, sought to examine lapses at the federal, state, and local level that resulted in 17 deaths at Marjory Stoneman Douglas High School in Parkland, Florida.

The shooting has led to several investigations into how law enforcement handled warnings about the shooter, Nikolas Cruz, beforehand and how authorities responded during the shooting.

Both the FBI and the Broward County Sheriff’s Office received repeated warnings about Cruz and his potential for violence.

CNN obtained a sheriff’s office log showing that from 2008 to 2017, at least 45 calls were made in reference to Cruz, his brother, or his family home.

On Sept. 24, 2017, a YouTube user with the username “nikolas cruz” posted a comment on a video that read “Im going to be a professional school shooter.”

The video’s uploader reported the comment to the FBI.

Agent Robert Lasky said the agency conducted database reviews but was unable to track down the user.

According to agency officials, the “caller provided information about Cruz’s gun ownership, desire to kill people, erratic behavior, and disturbing social media posts, as well as the potential of him conducting a school shooting.”

Rep. Sheila Jackson Lee, D-TX, asked Bowdich during the hearing why, despite receiving multiple tips, the FBI did not detain Cruz.

“Why did your agent not have his hair on fire?” she asked. “This was a monster who, unfortunately, happened to be a young person. And the actual agent wouldn’t do anything.”

Bowdich responded and said the issue could have been presented in such a way that made it seem like local law enforcement was already on top of the situation.

“I don’t know how this was presented to [the agent]. I don’t know if he believed this was a local matter. Because there was a lot of local discussion that maybe made him think this was being handled,” Bowdich said. “But I want to be clear here: We made a mistake. I’m not talking about any other agency or trying to shift the blame. This was our mistake.”

Bowdich said even if the FBI had acted on these tips, there was still a chance Cruz would have been successful.

“Even if we had done everything right, I’m not sure if we could have arrested him,” Bowdich said.

**MORE COVERAGE OF THE FLORIDA SHOOTINGS at LibertyHeadlines.com**

Legislators also discussed the legal ramifications of the shooting, including the push for stricter gun laws.

On March 14 the House passed the bipartisan Stop School Violence Act, which authorizes $500 million over 10 years for grants to improve training and coordination between schools and local law enforcement.

The bill’s goal is to help identify signs of potential violence before they occur and prevent a similar tragedy from occurring.

There has been a push — led by survivors of the Parkland shooting — to ban assault rifles, bump stocks, and to raise the legal age a young adult can purchase a gun from 18 to 21.

Rep. Louie Gohmert, R-TX, said gun control laws like these would not fix the problem.

“For some reason, there was this idea that if we don’t enforce the clear rule of law then all will be well, when actually that led to [Cruz’s] ability to buy a gun,” Gohmert said. “The problem is not the gun, it’s the one who holds it. As someone who spent four years training in our military with such weapons, it was not the weapon. It was the holder. Like the law, it can be used to build up or it can be used to destroy. It can be used to protect or destroy. What we need to do is get back to having a right and wrong.”

“To my friend who said it wasn’t the gun, there were 150 rounds fired in five minutes,” Deutch said, responding to Gohmert. “That is possible from that gun. It is a weapon of war. The point here is our gun laws our broken, we need to have that conversation in this committee.”

Rep. Jackson Lee said an assault rifle ban is the necessary next step and the only thing that will prevent a similar attack from happening.

“He didn’t kill 17 people with his fists,” she said. “He killed them with an AR-15 and we need to make sure that never happens again. Frankly, they need to be banned.”