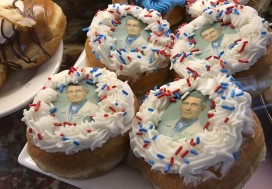 After decades of renown in American medicine, Dr. Anthony Fauci has become an unlikely celebrity in his role as director of the National Institute of Allergy and Infectious Diseases, where he has led the medical response to COVID-19 and tried to inform an anxious nation.

Fauci’s fame is showing up in all sorts of new, and sometimes odd, ways: A shop in Rochester, New York, cooked doughnuts featuring an image of a no-nonsense Fauci in a white coat. A Georgia brewery produced a pale ale called “Fauci Spring.” It’s got acai berries — healthy, right? — and experimental hops.

Amazon shoppers can buy a “Fauci for President” coffee mug or a devotional candle depicting him as a saint with a glowing heart. One Fauci fan account on Twitter has more than 21,000 followers, and there are others.

Much of Fauci’s newfound stardom comes from his appearances alongside President Donald Trump at White House briefings. Fauci’s science-based way of explaining the crisis has attracted untold numbers of fans.

Part of the attraction could be the way the 79-year-old with the gravelly Brooklyn accent has also gone outside the usual White House channels to engage with people who might not tune in to more traditional news venues.

Fauci did an online interview with “The Daily Show” host Trevor Noah, typically an administration critic, that has more than 11.5 million views online. Another Fauci interview with Golden State Warriors basketball star Steph Curry has been watched more than 450,000 times on YouTube.

Opening the nearly 30-minute chat, Curry praised Fauci for his work and “commitment to protecting the masses.” Fauci smiled from a separate frame of the video, a toy basketball goal hanging over his head in the background.

Not everyone is a fan.

Some conservatives have branded Fauci an attention-seeking fraud who’s part of a “deep state” cabal trying to bring down Trump, and the president himself retweeted a message that included the #FireFauci hashtag popular on far-right social media.

Trump also has expressed support for Fauci, but there are questions about how long that might last given Trump’s history of turning on members of his own administration, such as Jeff Sessions, the president’s first attorney general.

The pandemic is not Fauci’s first time in the spotlight.

An adviser to six presidents, he was awarded the Presidential Medal of Freedom in 2008 for his work advancing the treatment of HIV infections and AIDS. According to his official biography, an analysis last year showed he was the 41st most highly cited researcher ever.

But most scientific researchers have not been made into a stuffed toy with a red superhero cape. 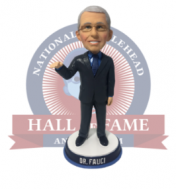 Or, for that matter, a bobblehead doll.

The Milwaukee, Wisconsin-based National Bobblehead Hall of Fame and Museum is taking orders for a Fauci bobblehead, with $5 from each $25 sale going to an American Hospital Association drive to purchase protective face masks for medical workers.

“Bobbleheads are the ultimate honor, and we think Dr. Fauci deserves it given what he has done and continues to do for our country and the world in the battle against COVID-19,” museum founder and CEO Phil Sklar said in a statement.

Fauci’s fame might be contagious: The museum also is planning a bobblehead of Dr. Deborah Birx, the White House coronavirus task force coordinator who has also won praise for her handling of the crisis.