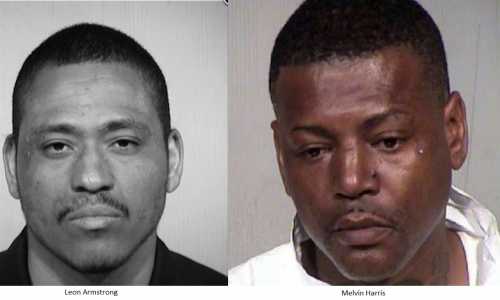 Leon Armstrong (left) died after allegedly being beaten by Melvin Armstrong in Arizona. He believed Armstrong had attempted to enter a convenience store restroom stall his daughter was using. IMAGES: Maricopa County Sheriff’s Office via Twitter

Melvin Harris was arrested on Aug. 4 for murdering Leon Armstrong with “extreme indifference” according to the Maricopa County Sheriff’s Office inmate records. He is scheduled for arraignment in Phoenix’s Superior Court on Friday, Aug. 17.

According to local news reports, Harris was picking up his 16-year-old daughter at a QuikTrip convenience store around 11:30 p.m. on Aug. 2 when Armstrong, 26, approached him in the parking lot asking for money.

Armstrong went into the store with the change he received. When Harris’ daughter and her friends exited the store, they informed him that the man had tried to enter the locked stall in the women’s restroom.

The girls also told a security guard, who escorted Armstrong out of the store. Harris reportedly told the guard they needed to take care of the situation or he would do it himself.

After an exchange with the security guard, Harris followed Armstrong to a gravel area and proceeded to punch him to the ground. He then kicked and stomped on the injured man and drove off.

Armstrong suffered a broken nose and brain swelling. He died in the hospital on Aug. 7.