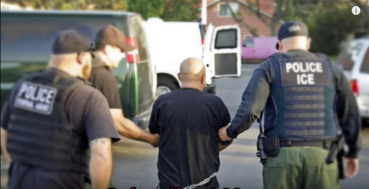 (Kristina Davis, The San Diego Union-Tribune) On a recent Friday, a group of visitors from San Diego that included attorneys and a federal judge sat in a Tucson, Ariz., courtroom and watched as illegal border entry cases were adjudicated from start to finish in a matter of hours.

Dozens of unauthorized immigrants, wearing the same clothes they were arrested in at the border just a day or two earlier, pleaded guilty and were sentenced by a rotating panel of judges showing off their individual styles, according to a report in the Arizona Daily Star.

The San Diego delegation was taking notes on Tucson’s program — known there and in other Southwest border cities as Operation Streamline — because a similar fast-track system is headed to California to handle the burgeoning caseload under the Trump administration’s “zero tolerance” crackdown on illegal immigration.

The program is tentatively set to begin in San Diego federal court July 9, according to attorneys.

Operation Streamline was introduced by the Border Patrol in Texas in 2005 under a different zero-tolerance policy. The program has survived in a few districts, with the overriding goal to prosecute a larger number of people crossing the border illegally by speeding up the process. It was not used in California.

Critics claim the expedited program jeopardizes defendants’ right to due process and have called it “assembly line justice.”

Exactly how a fast-track program will work in San Diego is still unclear. A committee including federal judges, prosecutors and defense attorneys has been working out the details.

“We are committed to securing the border by enforcing criminal immigration laws in a way that respects due process and the dignity of all involved,” said Kelly Thornton, a spokeswoman for the U.S. attorney’s office. “We are working collaboratively with the court, the defense bar and law enforcement to set up a process that accomplishes both goals.”

In a June 22 letter to the chief judge of the Southern District of California — on the same day as the Tucson visit — the federal defense bar reiterated its objections to a “separate” court. The letter then offered several suggestions as to how to frame the program in a way that would balance the duty to protect their clients.

“So though we offer these suggestions, that duty of loyalty will compel us to challenge these and any other set of procedures that impair either our clients’ dignity and humanity or the exercise of their constitutional rights,” the letter said. It was signed by Reuben Cahn, executive director of Federal Defenders of San Diego, and Jami Ferrara, an attorney who represents a panel of private attorneys who are also appointed by the court to serve as public defenders.

The letter provides the first detailed insight into how the program might run in San Diego.

The biggest concession defense attorneys are asking for is to make the program a five-day process, with defendants being arraigned one day, and then appearing in court on the fifth day to plead guilty and be sentenced — or in some cases to request a trial.

The time requested is longer than in places that have operated Streamline programs. Tucson’s is a same-day process, while Las Cruces, N.M., has a three-day program and Del Rio, Texas, is two days.

“We do not believe a one-day plea and sentencing system is feasible or constitutional,” the letter states.

Ideally, unauthorized immigrants who were either arrested the previous day or overnight would be available to be interviewed by defense attorneys in the morning, according to the letter. And in the afternoon during a hearing, a judge would advise the defendants of the charges against them, explain their rights, appoint counsel and discuss bail.

Defense attorneys would have a few days to follow up with their clients to review the evidence and discuss how to proceed. Then on the fifth day, the defendants would be back in court for a hearing to either plead guilty and be sentenced, or to request a trial. Misdemeanor defendants have a right to a bench trial, but not a jury trial.

The letter suggests putting four public-defender attorneys and four eligible private attorneys per day on a duty rotation to handle the day’s calendar.

The letter also requests that the defendants participating in this special court be housed in a detention facility nearby — either Metropolitan Correctional Center or Western Region Detention Facility, otherwise known as GEO — to ensure easy access to clients during the short turnaround between arraignment and sentencing.

The defense bar also asked for a system that would carefully track separated families and make it easier for reunification after the criminal case has been adjudicated.

Among the requests is a court order that directs prosecutors to ask arresting agents to identify instances of family separation, and an order requiring the defense to be provided with the location of the separated children, a contact number and each child’s “A number,” or “alien number.”

A process should also be implemented to make it easier for the families to be detained together once the criminal process is over and they are put into removal proceedings, the letter states.

An influx of defendants who don’t speak English or Spanish has also caused communication issues, and defense attorneys are asking for court interpreters who speak other languages — including a common indigenous language, Mixteco — to be made available for client interviews.

Another issue that frequently comes up during federal court hearings concerns the shackling of defendants in court. Federal Defenders of San Diego filed lawsuits over the practice a few years ago and the cases were litigated up to the U.S. Supreme Court, but the issue was never decided when the court found the detainees no longer had legal standing to bring the case.

Since then, the U.S. Marshals Service has gone back to routinely shackling all types of defendants by the ankles in pretrial hearings.

In its letter, the federal bar argues that defendants who will be appearing in this special court will be there for misdemeanor illegal entry, not violent crimes.

“At the recent Border Courts Conference in El Paso, the Arizona bench reported that Streamline clients appearing without shackles were calmer, more at ease during their colloquies and that the clients appeared ‘more engaged,’” the letter states.

The impact of zero tolerance — the Trump administration’s vow to criminally prosecute everyone crossing the border illegally — has been felt across the federal criminal justice system in San Diego since mid-May.

The pressure has caused more delays in processing defendants in time for court, prompted more drug cases to be sent to Superior Court and resulted in longer than usual hearings.

In the past two months, prosecutors have filed more than 1,300 cases of misdemeanor illegal entry at the border in San Diego and Imperial counties, according to a San Diego Union-Tribune analysis. That’s compared with 154 such cases filed during the comparable period last year, when authorities were instead targeting unauthorized immigrants who had serious criminal records or a history of multiple illegal crossings.