‘These survivors deserved a day in court. They deserved justice…’ 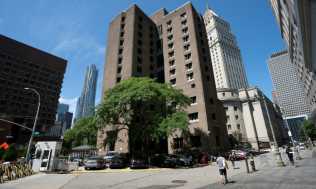 AFP/The Metropolitan Correctional Center in New York, where financier Jeffrey Epstein was found dead while being detained, is considered one of the most secure penal establishments in the US

(AFP) Outrage and intrigue over the apparent suicide in prison of well-connected accused sex trafficker Jeffrey Epstein soared Sunday as lawmakers pushed for answers, including whether “criminal acts” played a role in his death.

Epstein, a convicted pedophile who hobnobbed with countless politicians and celebrities over the years, was found dead in his cell Saturday while awaiting trial on federal charges he trafficked underage girls for sex.

The discovery came a day after a court released documents in which one of Epstein’s alleged victims claimed she was forced to have sex with well-known American political and business personalities. They have all denied the allegations.

Epstein’s death in a high-security New York jail, an apparent suicide that came just weeks after an earlier possible attempt on his own life, meant he should have been under close watch and has fueled anger and a conspiracy theory frenzy.

“It is a shame that he committed suicide,” she told CBS’s “Face the Nation.”

New York’s chief medical examiner Barbara Sampson said Sunday that an autopsy had been completed, but the determination of cause of death was “pending further information at this time.”

The procedure was observed by an outside pathologist at the request of Epstein’s representatives, she added. 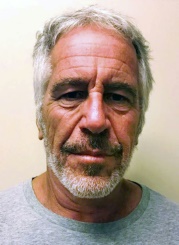 AFP/Jeffrey Epstein is seen in this handout photo obtained on July 11, 2019 courtesy of the New York State Sex Offender Registry

US Attorney General Bill Barr has instructed the Justice Department’s inspector general to probe Epstein’s death, saying it “raises serious questions that must be answered.”

The FBI is also investigating.

The New York Times reported Sunday that guards were supposed to check Epstein every half hour but that procedure was not followed the night before he was found, citing an unnamed law enforcement official.

The jail had also transferred his cellmate, leaving him alone, the Times said, citing two officials.

Prosecutors said Epstein sexually exploited dozens of underage teens, some as young as 14, at his homes in Manhattan and Palm Beach, Florida, between 2002 and 2005.

The young women were paid hundreds of dollars in cash to massage him, perform sexual acts and to recruit other girls, prosecutors alleged.

Epstein denied the charges and faced up to 45 years in prison if convicted.

Last month, Epstein was found unconscious with marks on his neck after a possible suicide attempt.

He was put on suicide watch for six days before being returned to his cell in a high-security section of the prison, the Times has reported.

Epstein — whose past friends included Donald Trump, former president Bill Clinton and Britain’s Prince Andrew — had been convicted in 2008 in a Florida state court of paying young girls for sexual massages at his Palm Beach mansion.

Those men have all denied knowing anything about Epstein’s alleged crimes.

The two thousand pages of previously sealed court documents released Friday focused on testimony by a woman who claimed she was Epstein’s “sex slave.”

“Some of wealthiest people in the world committed a horrible crime. If they think for a second that they got away with it because Jeffrey Epstein is dead, they’re dead WRONG,” tweeted New York Mayor Bill de Blasio, as prosecutors pledged to pursue the indictment.

Trump weighed in on Saturday, retweeting a conspiracy theory alleging that Bill Clinton may be connected to Epstein’s death.

“This is another example of our president using this position of public trust to attack his political enemies with unfounded conspiracy theories,” Beto O’Rourke, another Democrat running for president, told CNN.

Trump aide Kellyanne Conway, asked on “Fox News Sunday” about her boss’s retweet, said that “the president just wants everything to be investigated.”

Epstein avoided a lengthy jail sentence when facing the charges in Florida over a decade ago.

He served just 13 months under a secret plea deal struck with the then federal prosecutor in the state, Alex Acosta, who was forced to resign as US labor secretary last month over the issue.

Alleged victims were hoping for more justice this time around.

“I really wanted him to… be put in jail and have to sit there and think about what it is he exactly did to so many people,” one accuser, Michelle Licata, told ABC’s “This Week.”