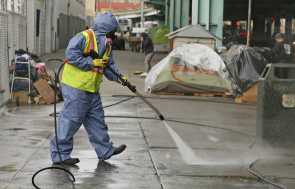 (Associated Press) California is failing to protect its waters from pollution, partly because of a worsening problem with homelessness in large cities such as Los Angeles and San Francisco, the U.S. Environmental Protection Agency said Thursday.

EPA Administrator Andrew Wheeler outlined a series of alleged deficiencies in California’s compliance with federal clean water laws in a letter to Democratic Gov. Gavin Newsom, demanding a detailed plan for fixing the problems within 30 days.

“California needs to fulfill its obligation to protect its water bodies and, more importantly, public health, and it should take this letter as notice that EPA is going to insist that it meets its environmental obligations,” Wheeler said in a statement. “If California does not step up to its delegated responsibilities, then EPA will be forced to take action.”

The letter escalates a feud between the Trump administration and California, a predominantly Democratic state that has filed more than 50 lawsuits opposing administration initiatives on the environment, immigration and health care.

“There’s a common theme in the news coming out of this White House this week,” said Nathan Click, spokesman for Newsom. “The President is abusing the powers of the presidency and weaponizing government to attack his political opponents. This is not about clean air, clean water or helping our state with homelessness. This is political retribution against California, plain and simple.”

Wheeler criticized the California Air Resources Board on Tuesday for a backlog of pending rules and regulations intended to reduce toxic smog. State officials blamed the logjam on federal delays in approving the plans. The administration last week revoked California’s authority to set its own automobile emission standards.

President Donald Trump warned last week that his administration would serve a violation notice on San Francisco for allegedly allowing needles and other waste to go through storm drains into the Pacific Ocean.

The San Francisco mayor’s office did not immediately return a request for comment Thursday but last week Mayor London Breed called Trump’s claim “ridiculous assertions.” She told the San Francisco Chronicle that the city has a combined sewer system that filters debris before it goes out to the bay.

In his letter to Newsom, Wheeler said urban homelessness was taking a toll on the environment, citing news reports of “piles of human feces” on sidewalks and streets.

“The EPA is concerned about the potential water quality impacts from pathogens and other contaminants from untreated human waste entering nearby waters,” Wheeler said. “San Francisco, Los Angeles and the state do not appear to be acting with urgency to mitigate the risks to human health and the environment that may result from the homelessness crisis.”

San Francisco is among the few remaining large urban areas that combine stormwater and sewage flows but that have not reached legal agreements with the EPA to ensure those systems comply with the Clean Water Act, Wheeler said. He called on the city to invest billions of dollars on upgrading its sewage treatment system so it could stop releasing untreated and partially treated waste into San Francisco Bay and the Pacific Ocean, a practice he said state regulators have long allowed.

“By failing to maintain its sewer infrastructure, the city allowed raw sewage to back up into homes and businesses,” Wheeler said.

He said those shortcomings prompted an EPA review that uncovered problems with California’s handing of other federal clean water programs, including 23 significant discharges of water pollutants in recent months that exceeded permit limits.

The investigation also found that in the most recent reporting period, the state had 202 community water systems that exceeded federal standards under the Safe Water Drinking Act for the presence of contaminants such as arsenic and lead, which put nearly 800,000 residents at risk, Wheeler said.

“These exceedances call into question the state’s ability to protect the public and administer its SDWA programs in a manner consistent with federal requirements,” he said.