Pruitt has been among Trump’s most effective Cabinet members… 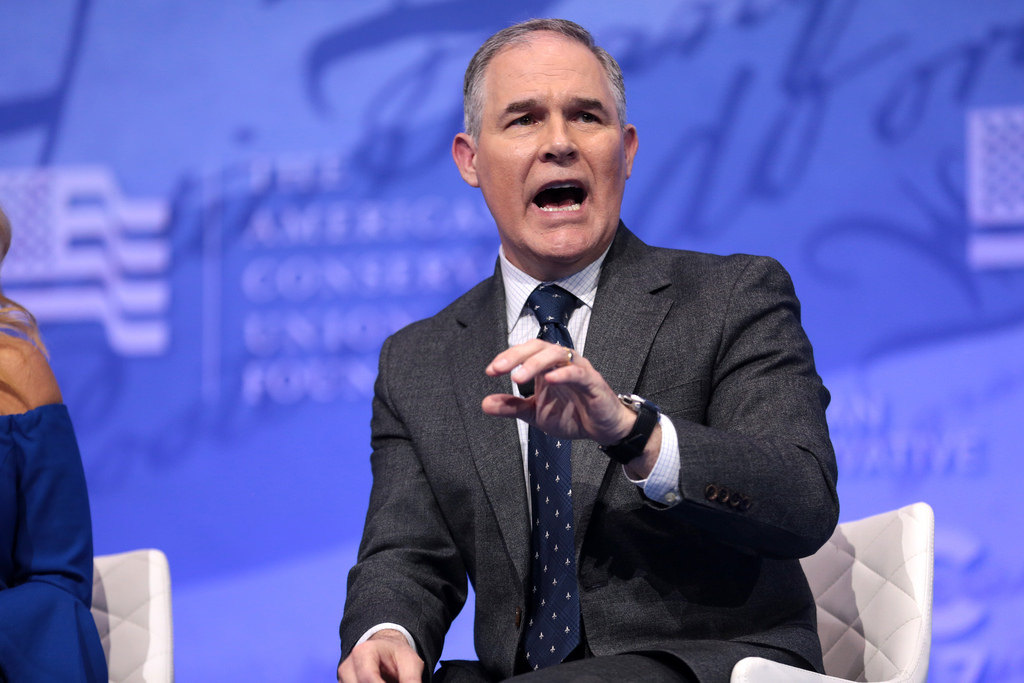 Pruitt spent a tense day on Capitol Hill fielding pointed questions from lawmakers on both sides of the aisle who have grown uncomfortable with mounting allegations against him and his agency. As Pruitt testified in back-to-back budget hearings, at least 10 investigations into reports of ethical lapses and mismanagement at the EPA hung overhead.

“I, more than anyone, want to establish the hard facts,” Pruitt said in an opening statement before a House Energy and Commerce Committee panel. “I have nothing to hide.”

Pruitt admitted that “there has been a learning process” and vowed to take some corrective action. But he mostly expressed defiance.

“Facts are facts; fiction is fiction,” Pruitt said. “A lie does not become truth just because it appears on the front page of a newspaper.”

He accused his critics of twisting a narrative about him to the point that it “does not reflect reality.”

“Those attacking the EPA and attacking me do so because they want to derail the president’s agenda,” he said. “I am simply not going to let that happen.”

But with the unflattering headlines piling up, some of Pruitt’s most steadfast supporters are expressing doubts about whether the hard-charging crusader for deregulation and fossil-fuel interests is still the right man for the job. And the White House is having trouble mustering enthusiasm for its man at the EPA.

“I am concerned the good progress being made on the policy front is being undercut by allegations about your management of the agency and use of its resources,” said Rep. Greg Walden, R-Ore., the Energy Committee chairman. “These issues are too persistent to ignore.”

During hours of testimony Thursday, Pruitt repeatedly deflected blame for controversial agency actions that have put his job in jeopardy. He said a $43,000 soundproof office phone booth that was built for him — illegally according to the Government Accountability Office — was not something he signed off on. Pruitt said he merely had asked his staff to get him access to “secure communications.”

Pruitt blamed his chief of staff for large salary hikes given under his authority to two aides from Pruitt’s home state of Oklahoma, even after the White House rejected the raises. But Pruitt contradicted his earlier public assertion that he had no idea the raises were granted until the media reported on them.

“I was aware … one of those individuals was receiving a raise,” he said in response to questioning from Rep. Ryan Costello, R-Pa. He said he was not aware how big the raise was, or that it was made in defiance of White House guidance.

House Democrats, who throughout the hearings admonished Pruitt for ethical failings and called on him to resign, were unimpressed by his explanations. Rep. Paul Tonko, D-N.Y., pointed to an email from one of the two aides in which she wrote that Pruitt specifically authorized the salary hike. When Pruitt said he hadn’t, Tonko responded, “Then, I am concerned you have no idea what is going on under your name in your agency.”

He accused Pruitt of a “propensity for grift.”

“What you have done is generate scandal after scandal,” he said. “When confronted about them you have repeatedly refused to take accountability.”

Republicans on the committee proceeded cautiously. Some expressed concern about Pruitt’s stewardship of tax dollars but tempered their comments with praise for his overturning of Obama-era environmental policies.

“If you can’t debate the polices in Washington, you attack the personalities,” Rep. Joe L. Barton, R-Texas, told Pruitt. “And that is what is happening to you.”

Republicans are conflicted because Pruitt has been among Trump’s most effective Cabinet members, aggressively dismantling clean water and air rules, working from the inside to weaken the authority and power of federal environmental regulators, and rolling back the Obama-era climate policies loathed by the coal and oil industries, with which Pruitt has long aligned himself. Yet Pruitt’s support even among conservatives has faded.

On Wednesday, after a reporter at the White House briefing listed several of Pruitt’s alleged misdeeds and asked press secretary Sarah Huckabee Sanders why he still had a job in the administration, she answered with what amounted to a shrug.

“We’re evaluating these concerns, and we expect the EPA administrator to answer for them, and we’ll keep you posted,” Sanders said.

Several Republican senators said before the hearings that Pruitt needed to explain why he is not, in effect, a creature of the swamp that Trump had vowed to drain.

Republican Sen. John Kennedy of Louisiana complained that Pruitt had “hurt the credibility of all of us.” Senate Environmental and Public Works Committee Chairman John Barrasso, R-Wyo., who has resisted pressure from Democrats to hold his own hearings, conceded this week that “there continue to be serious questions” about whether EPA “money is being spent appropriately.”

Even Pruitt’s mentor, Sen. James M. Inhofe, R-Okla., is no longer an unflinching defender — he now says he wants answers from Pruitt and has called for Barrasso to hold his own oversight hearing.

The list of allegations against the EPA chief is a long one:

Pruitt strained at the hearing to explain a discounted housing deal that he arranged in Washington with the wife of a top energy lobbyist; the huge raises; a pattern of flying first-class at taxpayer expense; and the $43,000 phone booth.

Former staffers have stepped forward to accuse Pruitt of various abuses of power, including requesting sirens and lights to get to a dinner, having the government pay for bulletproof tires on his SUV, and ginning up official events to justify luxury travel around the world and to his home in Oklahoma.

Pruitt and his spokespeople have said security concerns justified some of the requests, although they have not produced evidence that he faced threats.

Recent reports haven’t helped Pruitt’s case. One disclosed that as attorney general of Oklahoma, he bought a lavish home from a telecommunications lobbyist at a fire-sale price using a shell company that concealed his interest.

Then came the news that the energy lobbyist whose wife rented Pruitt a bedroom in Washington had brought a client to meet with Pruitt at the EPA — despite earlier insistence that no such meeting took place.

“I want to give him every chance,” Inhofe said Wednesday when asked by ABC News about Pruitt. But, he added, “I am concerned about some of the accusations.”

Even as Pruitt was finishing his responses to a long list of allegations, a new one arose. The EPA’s Office of Inspector General said Pruitt’s explanation for why he needed to travel first class and spend so much on security was not accurate.

Pruitt had said that a “threat assessment” written by the inspector general justified the expenses.