‘When a party loses a statewide election, it’s not because their opponents have cleverly divided their voters into a district or two … it’s the product of a larger political failure…’

Note: This is the second in a multi-part series examining Democrat attorney Marc Elias. This article covers Elias’ role in state redistricting challenges. Other articles will explore Elias’ role in election recounts, the Steele dossier and campaign fundraising violations.

(Ben Sellers, Liberty Headlines) Attorney Marc Elias, touted as Democrats’ go-to guy for issues related to recounts and redistricting, has had his work cut out for him following the recent midterm election.

Most recently, he has been secured by incumbent Democratic Sen. Bill Nelson to fight his narrow election-night loss to Republican challenger Rick Scott. With other contentious legal disputes emerging in the Florida and Georgia gubernatorial elections and the Arizona Senate race, Elias will likely have some kind of a role.

But while Elias, who was general counsel for both the Hillary Clinton and John Kerry presidential campaigns, now has his moment in the national spotlight to shift the political power structure toward the Democrats, he also has been working behind the scenes for much longer to steer the election—by challenging the redistricting functions of state legislatures within the court system.

The direct result of his efforts included several Democratic congressional pickups in swing states like Virginia and a bluer map for the 2020 presidential election in states that once were highly competitive.

Meanwhile, the Republican National Committee’s war-chest—already far outpaced by the well-heeled left—was forced to dedicate additional resources to contests in places that once had been all but assured, and taxpayers continue to line Elias’s pockets challenging the rulings of activist left-wing tribunals that have been tied up in the court system.

During a recent episode of “The View,” liberal co-host Joy Behar lamented the mixed election results in which Republicans were able to maintain and even build on their small majority in the U.S. Senate.

This Senate majority not only assures an easier road to judicial and Cabinet appointments for at least the next two years, but also helps to protect President Donald Trump from removal should Democrats in the House of Representatives seek to impeach him for partisan reasons.

Behar’s knee-jerk response was not only revealing of her limited scope of political knowledge, but also of the party’s obsession with the notion that the system is inherently rigged against them, which in turn justifies their efforts to re-rig in their favor by any means necessary.

In the face of President Barack Obama’s staggering losses during his two terms—netting a total of more than 1,030 seats flipped to the GOP in state and national races—the Left desperately needed a scapegoat.

Obama’s first midterm, in 2010, during which Democrats lost an unprecedented six Senate seats, six governorships and 63 House seats, flipped the House and sent a clear message about the Affordable Care Act that had been passed a few months earlier, as well as the condition of the economy and other crucial issues regarding the direction of the country.

Rather than see the elections as a mandate on Obama’s policies or divisiveness, though, Democrats instead sought to blame the institution that failed them (as they frequently have been apt to do—whether it is the Electoral College, campaign finance, the filibuster, the court system), even if it may have benefited them in the past. 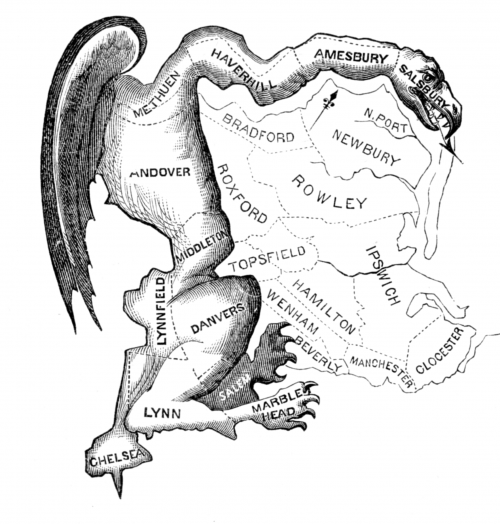 Their main nemesis du jour was gerrymandering, the redistricting process that got its name from Massachusetts Gov. Elbridge Gerry in 1812, when it was first implemented to give the party in power an electoral advantage. The word was a portmanteau of Gerry’s name and the salamander-like district that he had signed off on creating.

To be certain, the practice—typically done after every 10-year Census—has created some egregiously shaped districts in many states, with tentacles spreading into pockets of affluence or poverty or separating urban and rural areas in order to consolidate voters most likely to lean a certain way. It may, justifiably, feel like disfranchisement for some living in districts where their voting power is diminished.

However, few have disputed in the past that if consistently applied it benefits both parties, resulting in a sort of imperfect stasis, another factor in the political calculus that functions as a sort of check and balance from one election to the next, with no cleaner way of ensuring fairness and accountability having been provided for under the law.

In a piece Politico published last year as prelude to a potentially landmark Supreme Court case, author Jeff Greenfield noted that the Left’s “defeats did not happen because of gerrymandering … In order for the GOP to use its power to entrench its majorities, it had to win those majorities in the first place.”

The article continued, “That happened because Republicans and their conservative allies poured resources into a workmanlike effort to win control over state politics, while Democrats were mesmerized by the more glamorous fight to win and hold the White House.”

As Greenfield noted, Republican gains in the Senate and governor’s races actually served as an argument against the Left’s gerrymandering excuse, since it is impossible to redistrict them without redrawing the state lines.

“What has happened, rather, is that the Democratic Party has lost touch not just with the white working class, of which we’ve heard so much this past year, but with a much broader segment of American voters,” Greenfield said.

“When a party loses a statewide election, it’s not because their opponents have cleverly divided their voters into a district or two, or because their voters are ‘clustered’ in a city or two; it’s the product of a larger political failure.”

Redistricting from the Bench

Whether or not it was a symptom of a larger political failure and being out of touch with a critical mass of voters, that didn’t stop Democrats from wanting to right the wrong by rigging the system in their favor.

Twitter challenge: Wisconsin has a partisanship score (PVI) of EVEN. Below, I’ve drawn a GOP gerrymander where 6/8 districts have a score of R+7 or higher.

I will personally award $7,000 to the first follower who draws a Dem gerrymander where 6/8 districts are D+7 or higher. pic.twitter.com/h0dJ922FAE

If Republicans were going to use state legislatures and elected offices to entrench their power, the Democrats would need to use activist courts and the un-elected bureaucracy to unravel the laws.

Their first big break came as the Supreme Court agreed to hear two cases emerging from the 2011 redistricting: Gill vs. Whitford in Wisconsin, which plaintiffs argued favored Republicans, and Benisek vs. Lamone in Maryland, in which Democrats in power had redrawn a district to eliminate a Republican seat.

However, the high court (with now retired Justice Anthony Kennedy casting the swing vote) decided that the cases lacked standing, and that each individual district would need to handle its own suit rather than a statewide one.

Although this would seem a break for Republicans, the failure to resolve the issue—instead punting it back to the state level—ultimately empowered attorneys like Elias to take advantage of more favorable situations, such as the liberal-friendly Fourth Circuit Court of Appeals.

Elias took up cases in Virginia and North Carolina (which had a long history of challenging districts in the courts), joining other suits to argue that the existing districts were racist.

Working with state-level officials, some of whom he previously had helped install through election recounts, he was able to circumvent the GOP-led legislatures using “sue till blue” litigation that was extremely costly to taxpayers and highly lucrative for the Perkins Coie law firm.

Although the legislatures continued to challenge the cases, with the litigation tied up before the midterm election, state-level Democrats were empowered to implement their own redrawn maps.

Of four closely watched races in Virginia where the GOP had incumbents, Democrats flipped three seats. In North Carolina, Republicans managed to fend off several traditionally red seats by minuscule margins but were forced to devote unprecedented resources to doing so as outside money flooded in from the Left.

The greatest impact, though, may have been in Pennsylvania, where Democrats managed to flip four districts in the area surrounding Philadelphia after the state Supreme Court forced a map redraw. (Republicans were able to flip one previously Democratic district as well.)

Even if Elias had no hands-on involvement, he was certainly watching with interest from the sidelines.

BREAKING: Pennsylvania Supreme Court strikes down congressional map. Orders new map in time for 2018 election. Since the case was decided under the State constitution, there is no route to SCOTUS. There will be a new, fair map for 2018.

Barring any new developments in court rulings, the impact of the Pennsylvania decision—as well as those in Virginia, North Carolina, Michigan, Florida, Wisconsin and other potential battleground states targeted in the redistricting initiative—will most certainly be to upset the balance and turn once competitive states into a blue wall, effectively disfranchising voters in vast swaths of rural areas while disproportionately weighting the urban population.

Rather than rest on their laurels, though, the Left will not stop until it is in complete control. As liberal activist David Daley told left-skewing political website Vox, “The Democrats made some gains, but I’m not sure that they made enough gains to ensure that they have a reasonable voice in the process.”