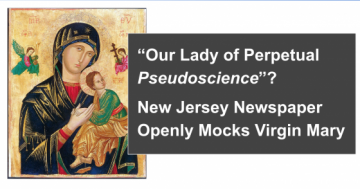 (Brendan Clarey, Liberty Headlines) A Sunday editorial in the Newark Star-Ledger and NJ.com mocked religious groups across the board.

The paper criticized the Garden State’s policy that allows parents to obtain religious exemption from vaccinating their children, and it did so in a way that people of faith might find offensive.

The editorial sarcastically pointed out that the state cannot prove people go to the churches they claim they go to: “The state can’t ask whether you really do, in fact, attend Our Lady of Perpetual Pseudoscience or the Church of Latter-Day Dudes, or what tenet actually prohibits this.”

And the religious mockery continued: “Your refusal to help protect your child and everyone else’s against dangerous diseases like measles, mumps and polio is entirely your business. Praise be.”

After the initial inflammatory language, the editorial took a more informative tone as it explained the controversy in question: The New Jersey Assembly Health Committee Chairman, Herb Conaway, proposed a new state law that would require parents of unvaccinated children to explain why vaccines are in opposition with their religious beliefs.

After the bill was approved last Thursday after several hours of testimony from parents and religious leaders, a group of a few dozen people yelled phrases like: “You are going to hell!” “Shame!” and “You Democrats destroy America!”according to the Newark Star-Ledger.

One woman, Ashley Blackwell, said she “could not go against the word of God” by allowing vaccines that use aborted fetal tissue into her own children, and she’s not alone.

Right to Life Michigan also claims that aborted fetal tissue has been used to create the basic components of vaccines used today, though not directly.

“If these vaccines were merely tested on patients without their consent, similar to the Tuskegee syphilis experiments, there would be widespread outrage and those responsible for the violation of patients’ rights would face serious consequences,” Right to Life said on its website. “Yet the researchers in this case not only failed to receive consent from the research subjects, but purposefully took their lives.”

But Sunday’s editorial implied the bill is geared toward those who resist the vaccine out of ignorance, as if there is no religious argument that can be made for the vaccines.

“The problem this bill seeks to address is parents who claim to have a religious objection, but really just ascribe to one of the half-baked, anti-vaxxer conspiracy theories circulating in the Twittersphere,” the editorial read.

And they want to go even further than what many think is too far: “Our only quibble with this bill is that it doesn’t go far enough. We should follow California, which since that measles outbreak has not allowed any nonmedical exemptions, period.”