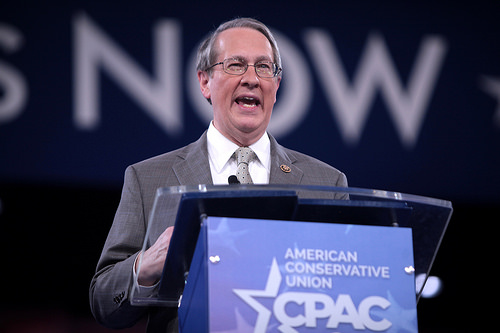 Executive Director for the Center for Immigration Studies Mark Krikorian wrote an op-ed in National Review that called for a national E-verify system, describing it as less celebrated than “deporting rapists” but an important tool for “conventional enforcement against ordinary people who flout the law.”

“The E-Verify system would confirm an employee’s eligibility for work within three days, per Goodlatte’s proposal,” Krikorian wrote in Politico. “Failure by employers to comply with the E-Verify requirements could lead to criminal charges, monetary fines and debarment from federal contracts.”

But conservatives and libertarians who are concerned with privacy and the role of government, such as representatives in the House Liberty Caucus, think the threat posed by mandatory E-verify outweighs its potential usefulness.

Norman Singleton, president of the Campaign for Liberty, an individual rights-oriented group supported by Ron Paul, wrote against any compromise immigration bill that mandates E-verify, warning that the system would create a new national ID program.

“If the mandatory E-Verify ID becomes law, your Social Security number and ‘biometric’ id — such as your fingerprints or retinal scans — will be placed in a government database so future employers can match it with the information on your government ID card to ensure you have federal permission to hold a job,” Singleton wrote.

Conservative Republicans fled from the immigration bill backed by House Speaker Paul Ryan, R-Wisconsin, which would not have required nationwide E-verify.

The “Border Security and Immigration Reform Act,” which was created in private by GOP leadership, received the support of only 121 Republicans on a vote in late June, with 112 Republicans opposing it.

The bill introduced by Goodlatte, R-Virginia, received more widespread support — and approval from the president.

HOUSE REPUBLICANS SHOULD PASS THE STRONG BUT FAIR IMMIGRATION BILL, KNOWN AS GOODLATTE II, IN THEIR AFTERNOON VOTE TODAY, EVEN THOUGH THE DEMS WON’T LET IT PASS IN THE SENATE. PASSAGE WILL SHOW THAT WE WANT STRONG BORDERS & SECURITY WHILE THE DEMS WANT OPEN BORDERS = CRIME.  WIN!

The “Securing America’s Future Act,” which The Hill deemed a “hard-line immigration bill,” garnered 193 Republican votes, coming up 25 short of the 218 needed to pass the House.

Only 41 Republicans voted against the legislation that “would have drastically cut the nation’s legal immigration levels,” codified Deferred Action for Childhood Arrivals, built a wall along the southern border, and mandated nationwide E-verify, Vox reported.

It’s true.  I am NOT a fan of a mandatory National ID. It’s just more big government imposition on working Americans. Enforce the border instead. https://t.co/0BneFVLiKF

Enforcing the border does not end the “magnet of jobs” that cause many immigrants to illegally emigrate to America. Nor does it solve the main source of illegal non-citizens living in the United States: overstayed work and travel visas, not illicit border crossing.

The Campaign for Liberty urged opposition to Goodlatte’s new immigration bill, the “AG and Legal Workforce Act.” He introduced the bill on July 18.

The bill would create a new guest worker program and allow farms and food-processing plants to hire up to “450,000 foreign workers for three years under the plan, provided no U.S. workers could be found who would do those jobs,” Krikorian wrote.

“All current employees of federal, state and local government; federal contractors; or industries requiring security clearances would have to show proof they are allowed to work in the United States,” he continued.

Goodlatte’s bill is meant to attract Republican support, since the H-2C program would appease business constituents.

Liberty Republicans believe Goodlatte’s E-verify system would start as a process for preventing illegal immigrants from working in the United States, but then they think it will morph into something more odious.

Singleton compared the system to the Patriot Act and the income tax, which started as small ways to protect us from terrorism and pay down the national debt but grew into mass surveillance and burdensome taxation.

“Once this new ID system is in place, it is only a matter of time before it is used to deny employment to individuals who own ‘too many’ firearms, or homeschool their children, or have asserted their rights to travel without being assaulted by the TSA, or who challenged the IRS’s ‘assessment’ of how much taxes they owe,” Singleton wrote.