‘Their actions were borne solely of fear and apprehension…’ 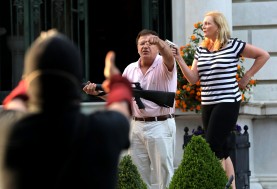 Mark and Patty McCloskey standing in front their house in St. Louis/St. Louis Post-Dispatch via AP

(Claire Russel, Liberty Headlines) A group of neighbors condemned the St. Louis attorneys who confronted protesters with firearms, after the protesters broke into a private neighborhood and destroyed the gateway entrance to their home.

An open letter released this week, and signed by at least 24 households in the neighborhood where the altercation took place, accuses Mark and Patricia McCloskey of endangering the safety of their neighbors by brandishing firearms in their driveway, according to KMOV-4.

“From many walks of life, people choose to make this neighborhood home for many reasons, including the sincerity, empathy and neighborliness exhibited by the vast majority of those who live here,” the letter states. “Some of us choose to speak up following the horrific event that transpired on Sunday evening near our homes. As the undersigned, we condemn the behavior of anyone who uses threats of violence, especially through the brandishing of firearms, to disrupt peaceful protest, whether it be in this neighborhood or anywhere in the United States.”

Black Lives Matter protesters broke into a gated community in order to march to the home of St. Louis Mayor Lyda Krewson.

To do so, they damaged a gate to gain entry and illegally stormed through the neighborhood.

As a result, the protesters are now under investigation by St. Louis police, who could potentially charge them with fourth-degree assault by intimidation or trespassing.

The McCloskeys have faced heavy criticism for confronting the mob, but they have defended their actions, arguing that the protesters were threatening them, yelling obscenities, and attempting to trespass on their property.

“This is all private property. There are no public sidewalks or public streets. We were told that we would be killed, our home burned, and our dog killed. We were all alone facing an angry mob,” Mark McCloskey explained.

Under Missouri’s “Castle Doctrine,” residents are allowed to use force against an intruder on their property — which means the McCloskeys legally were within their rights, according to the couple’s lawyer, Albert Watkins.

“Both Mr. and Mrs. McCloskey acted lawfully on their property which sits on a private gated lane in the City of St. Louis,” Watkins said in a statement. “Their actions were borne solely of fear and apprehension, the genesis of which was not race-related. In fact, the agitators responsible for the trepidation were white.”