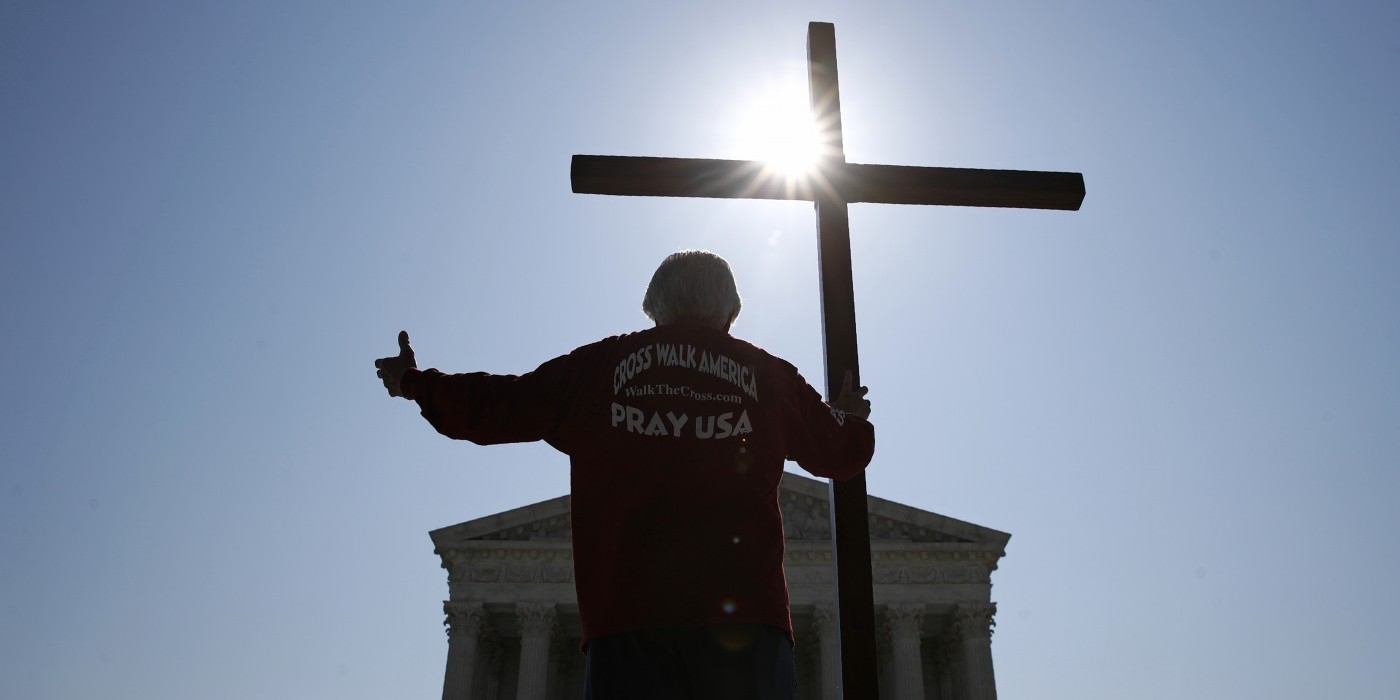 Tom Alexander holds a cross as he prays prior to rulings outside the Supreme Court. / PHOTO: Associated Press

In Little Sisters of the Poor v. Commonwealth of Pennsylvania, the high court sided with two Catholic schools in finding that certain employees of religious schools, hospitals and social service centers can’t sue for employment discrimination.

And in Our Lady of Guadalupe School v. Morrissey-Berru, also decided 7-2, the court upheld the Trump administration’s allowance for a broad religious or moral exemption from the Obama-era Affordable Care Act’s requirement that employers provide free contraception.

Those hailing the rulings included the Southern Baptist Convention’s public policy arm, leaders of the U.S. Conference of Catholic Bishops and the conservative Family Research Council.

By contrast, Roman Catholics who have urged their church to be more accepting of LGBTQ people were dismayed by the workplace ruling, warning that it could backfire if more faith-based employers were seen as discriminating in their hiring and firing.

The religious workplace ruling comes less than a month after the Supreme Court extended protections against employment discrimination to LGBTQ workers, a 6-3 decision that left the door open to future religious exemptions.

Some legal experts underscored that Wednesday’s decision gave broader—but still limited—leeway for faith-based organizations to make employment decisions without regard for discrimination claims.

Wednesday’s ruling clarified the type of employees a house of worship or related institution “basically has very broad power to hire and fire, in a way that makes clear the zone is fairly broad when it comes to teachers,” said Eugene Volokh, a UCLA School of Law professor.

That clarity “is not of unlimited breadth, but it is broader, and it does cover pretty much everybody who teaches religion” at a religious school, Volokh said, adding that the decision “definitely is a win for autonomy for religious institutions.”

Eric Rassbach, a senior counsel at the Becket Fund for Religious Liberty who argued for the schools in the case, said that it should be viewed together with last month’s ruling.

He noted, however, that the question of whether the likes of gym teachers and other employees not involved in religious instruction would be covered by the ruling remains unresolved.

It’s unclear how widespread the effect of the decisions will prove to be.

Kristen Waggoner, general counsel at the conservative-leaning Alliance Defending Freedom, welcomed them both but does not predict a big increase in employers seeking a religious or moral exemption from the contraception mandate.

“Those who want to force those with moral and religious objections to violate those convictions always suggest there’s a slippery slope, or it’s going to open all kinds of harms, and that just hasn’t proven itself to be true,” she said.

Charlie Camosy, a professor of theological and social ethics at Fordham University, also welcomed both rulings, saying via email that they showed a respect for religious convictions at a time when American culture is increasingly secular.

“Religious freedom is really about carving out a space for all—whether religious or secular—to live according to their foundational beliefs and values,” he wrote.

The decisions’ political power was clear from the praise they drew from religious conservatives.

“I welcome the Supreme Court’s rulings to protect religious individuals, so they can live out their faith without being forced to violate their conscience,” Arkansas GOP Sen. Tom Cotton said in a statement.

Vice President Mike Pence reflected the victorious mood on the religious right with a tweet underscoring the centrality of conservative, faith-focused voters to the Trump administration’s agenda.

Two Big WINS for Religious Freedom at SCOTUS today. All Americans of faith can be assured that under President @realDonaldTrump, the Obama-Biden assault on religious liberty is over! We will always stand with every American of every Faith! 🇺🇸