In a shareholder meeting on Thursday, Disney CEO Bob Iger said Behar apologized to Pence directly over the phone after shareholder Justin Danhof — who is also the general counsel for the National Center for Public Policy Research — questioned Iger about Disney’s blatant anti-Trump bias.

Danhof said Disney’s recent decisions have been “strange when trust in media is at an all-time low,” and slammed its networks for being “nothing more than 24/7 anti-Trump tirade channels.”

On Feb. 13, “The View” mocked Pence’s faith, with co-host Sunny Hostin saying she didn’t want her “vice president, um — speaking in tongues and having Jesus speak to him.”

Behar went even further, saying, “hearing from Jesus is called a mental illness.”

“What do you say to the tens of millions of Christians, and President Trump supporters, that your networks have so blatantly offended and ascribed hateful labels?” Danhof asked Iger in the meeting. “Specifically, do you think, like Mrs. Hostin and Mrs. Behar, that the Christian faith is akin to a dangerous mental illness?”

Iger responded and said Behar apologized to Pence — who said it was “wrong” for ABC to televise “religious intolerance” on a C-SPAN appearance — and that he felt Behar’s apology was “appropriate.”

Responding to Behar’s comments on Christianity, Iger said: “I don’t think it was right.”

But Danhof — who leads the National Center for Public Policy Research’s Free Enterprise Project — said the meeting was a “charade” in a recent press release.

Iger ignored important questions from shareholders throughout the meeting, Danhof said, only allowing “adoring fans and company employees” the company had “strategically planted throughout the room” to speak.

“I have never seen anything like the charade that Disney executives executed today. Iger and the rest of Disney’s leadership need to immediately issue a genuine apology to every investor who attended today’s meeting,” said Danhof. “Bob Iger has been called the most powerful person in Hollywood. What a joke that is. Today, he proved he couldn’t even handle a few critical questions from investors.”

In the shareholder meeting, only people sitting in a few designated rows were allowed to ask Iger questions.

And the majority of the people sitting in these designated rows were a part of a “specific Disney fan club” that were allowed to enter the room before the rest of the shareholders.

Even though many shareholders, including Danhof, complained about this method, Iger refused to answer their questions. 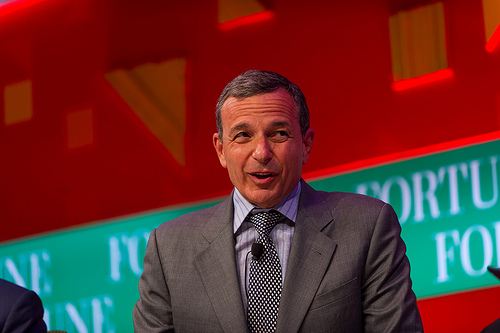 “Disney’s shareholder meeting was fake news. The Free Enterprise Project stood alone in being able to pose tough questions to CEO Bob Iger amidst the self-congratulatory statements and fluff questions delivered by a string of kids and Disney cast members designed to keep the meeting conflict-free,” said National Center’s vice president David W. Almasi. “Shareholder meetings are a place for investors to discuss important business with company leaders, and Disney showed outright contempt for them.”

Danhof said Disney must be held accountable for the message it promotes, but Iger left little room for criticism during the meeting.

Other groups have been able to pressure the media mogul, however.

The media watchdog posted the contact information for 14 of the program’s advertisers as well as ABC’s president.

ABC received more than 30,000 phone calls from viewers because of the campaign.

“It is a good first step that Joy Behar privately apologized to Vice President Pence, but it is not nearly enough. Behar and ABC need to publicly apologize for the bigoted slurs on ‘The View.’ The bigoted statements made about the Vice President’s Christian faith offended hundreds of millions of Christians across the country, the largest faith group in the United States,” MRC president Brent Bozell said. “Their apology should therefore be as public as their insult.

“When they do that, this whole matter will be put to rest. Until they do, we will not let up our campaign to let the world — including their advertisers — know of their anti-Christian bigotry.”