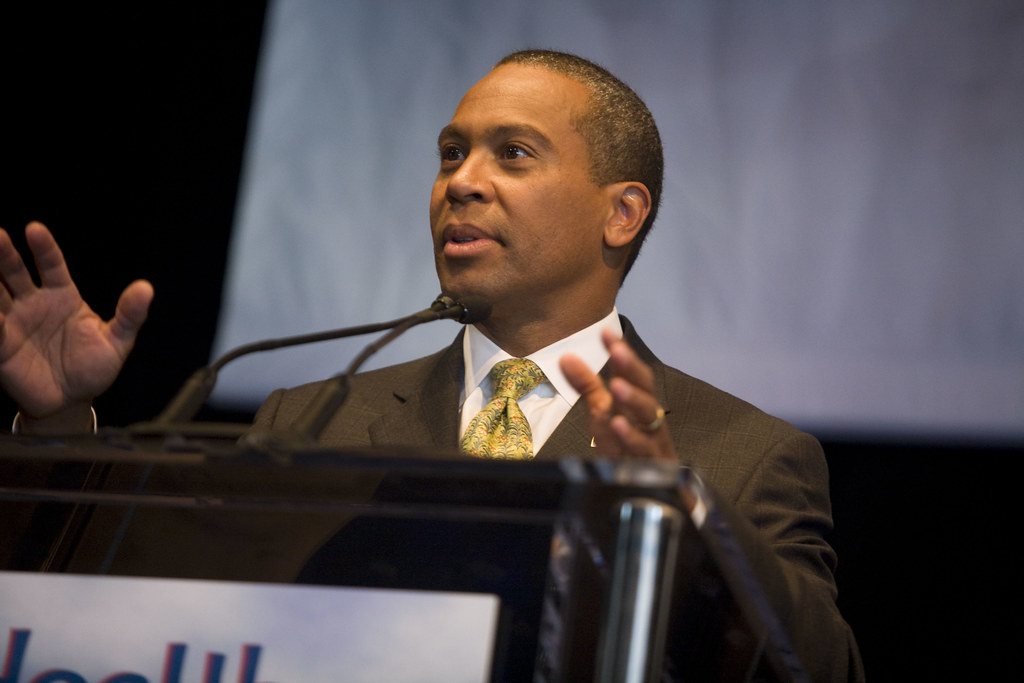 (Associated Press) Former Massachusetts Gov. Deval Patrick is considering making a late run for the Democratic presidential nomination, according to two people with knowledge of his deliberations, underscoring some Democrats’ deep uncertainty about the party’s current crop of contenders.

Patrick, a close friend and ally of former President Barack Obama, ruled out a presidential bid earlier this year but has since been talking with Democratic operatives and donors about launching a campaign. He has not made a final decision on whether to run, but he is expected to do so quickly, given fast-approaching deadlines to get on the ballot in key states.

Patrick is the second Democrat to weigh jumping into the race at this late juncture, less than three months before the kickoff Iowa caucuses. Former New York City Mayor Michael Bloomberg is also reconsidering a run, citing concerns about the current Democratic front-runners’ ability to defeat President Donald Trump. Bloomberg is expected to make a final decision on his 2020 prospects within days.

The people with knowledge of Patrick’s deliberations spoke on condition of anonymity because they were not authorized to discuss the matter publicly.

Democrats plunged into the 2020 race with sky high enthusiasm about the prospects of defeating Trump and with a historic number of candidates vying for the nomination. But as the field has started to dwindle, some in the party have raised concerns about the durability of former Vice President Joe Biden and the ability of liberal Sens. Elizabeth Warren and Bernie Sanders to win in a general election.

Although Patrick ruled out a run late last year, he reopened conversations with close friends and aides over the summer but did not take active steps to form a campaign. In recent days, those conversations have intensified, with Patrick gauging interest in a run with donors and Democratic operatives.

He would face big hurdles to launching a campaign at this late stage. Unlike Bloomberg, a wealthy billionaire who would self-fund, Patrick would have to quickly raise money to build out a campaign operation and boost his familiarity with voters. Some of his former political advisers are already working for other 2020 candidates, including his former chief of staff Doug Rubin, who is working for Tom Steyer.

Patrick, who made history as Massachusetts’ first black governor, could gain traction in neighboring New Hampshire, which holds the first primary contest. However, he’d face stiff competition there from two other neighboring state candidates: Warren of Massachusetts and Sanders of Vermont.

Bloomberg plans to skip the early states, where candidates have camped out for months courting voters and building operations. Instead, he’s said he would focus on the crush of states that vote on March 3 — dubbed Super Tuesday — and beyond, where more delegates are at stake.

When Patrick decided last year not to run, he cited what he called the “cruelty” of the election process.

“After a lot of conversation, reflection and prayer, I’ve decided that a 2020 campaign for president is not for me,” Patrick had posted on his Facebook page. Patrick said he and his wife worried that the “cruelty of our elections process would ultimately splash back on people whom Diane and I love, but who hadn’t signed up for the journey.”

Early in his career, Patrick served as assistant attorney general for civil rights in the Clinton administration and later worked as an executive at Texaco and Coca-Cola. Since leaving the governor’s office, Patrick has worked as a managing director for Bain Capital — a company co-founded by Mitt Romney and widely criticized by Democrats during Romney’s 2012 Republican presidential campaign.