‘Quickly becoming the illicit drug capital of the world…’ 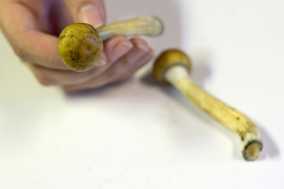 (AFP) Nearly 15 years after it became the first American city to legalize cannabis, Denver went to the polls on Tuesday to decide on decriminalizing hallucinogenic mushrooms.

If ballot initiative 301 is passed, enforcement of penalties against people over 21 who use or possess psilocybin mushrooms — known colloquially as magic mushrooms — would be deprioritized in the Colorado state capital.

Proponents point to studies that say psilocybin is not considered addictive and could be used against depression or opioid addiction, which causes thousands of deaths in the US each year.

“Humans have used these mushrooms for thousands of years for healing, rites of passage, spiritual insight,” said the organization Decriminalize Denver, which in January announced it had collected enough signatures to put the measure to a vote.

Passage would once again put Colorado at the forefront of American drug legalization after it became one of the first two states to vote to legalize marijuana in 2012 — though not all residents approve.

“Denver is quickly becoming the illicit drug capital of the world. The truth is we have no idea what the long-term health effects of these drugs are going to do to the people of Colorado,” Jeff Hunt, an official at Colorado Christian University, said on CNN after the referendum on mushrooms was announced.

Marijuana is now legal for recreational use in ten US states, including its most-populous, California, while 30 of 50 states allow its use for medical purposes.

Last year, a similar measure to decriminalize psilocybin mushrooms statewide in California failed to gain enough signatures for inclusion on the ballot.