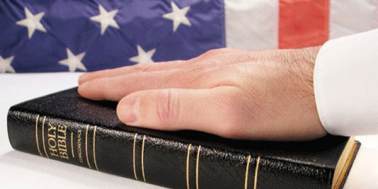 (Kaylee McGhee, Liberty Headlines) The House Natural Resources Committee voted to keep the phrase “so help you God” in its oath administered to witnesses after Republicans slammed Democrats for attempting to remove the language.

Democrats on the committee staged an effort to omit the phrase, sneaking it into a new committee rules package.

If they would have had their way, the revised oath would have read: “Do you solemnly swear or affirm, under penalty of law, that the testimony that you are about to give is the truth, the whole truth, and nothing but the truth?”

The amended draft placed the words “so help you God” in red brackets, according to Fox News.

And the words “under penalty of law” were in red text, indicating that Democrats wanted to replace the oath’s original religious connotation with a legal one.

Republicans fought the effort on the House floor.

Even some of the committee’s Democrats agreed that the move was uncalled for.

“I do think that it’s hurtful and harmful to go out of our way to take it out,” Rep. Jefferson Van Drew, D-N.J., said. “I don’t see the point of that.”

“So help you God?”
Should it stay or should it go in oaths?
The House Natural Resources Committee debated it today and here’s what they decided: pic.twitter.com/0UbBq4TWCN

“It is incredible, but not surprising, that the Democrats would try to remove God from committee proceedings in one of their first acts in the majority,” House Republican Conference Chairwoman Liz Cheney, R-Wyo., told Fox News. “They really have become the party of Karl Marx.”