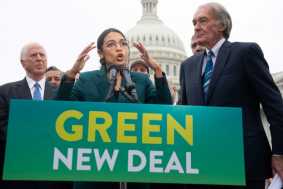 The chamber easily rejected the Green New Deal, a proposal offered by progressive Democrats that would dramatically shift the United States away from fossil fuels toward renewable energy in an unrealistic effort to zero out greenhouse gas emissions within a decade.

Several Democrats running to challenge President Donald Trump next year have signed on to the plan.

Six Senate Democrats are 2020 White House candidates, and the chamber’s Republican Majority Leader Mitch McConnell sought to get them on record supporting what would be a multi-trillion-dollar boondoggle.

“I could not be more glad that the American people will have the opportunity to learn precisely where each one of their senators stand on the ‘Green New Deal’: a radical, top-down, socialist makeover of the entire US economy,” McConnell said.

The legislation introduced by McConnell failed to advance, with zero votes in support, 57 opposed, and 43 Democrats — including all six presidential candidates — voting “present.”

“Some Democrats are trying to run away from something they previously embraced,” said Republican Sen. John Barrasso of Wyoming, Chairman of the Environment and Public Works Committee. “If so many Democrat Party leaders support the Green New Deal, why aren’t they willing to vote for it and stand up behind it today?

“The answer is obvious: the Democrats are ducking the vote.”

“We need real action on climate change — not this kind of sham vote,” said 2020 contender Senator Kirsten Gillibrand, who has wholeheartedly embraced the Green New Deal.

The plan does not detail how America will wean itself off of fossil fuels, or how much the ambitious transformation will cost.

Republicans are seeking to make climate change a wedge issue in the election.

“When faced with their signature proposal, Democrats were too embarrassed to even commit to it,” said Adam Brandon, president of conservative grassroots group FreedomWorks. “Democrats have made clear to their base that they are all talk and no game. According to Senate Democrats, simply holding a vote on the Green New Deal amounts to an act of Republican sabotage.”

Trump himself mocked Democrats over the plan.

“No planes. No energy. When the wind stops blowing that’s the end of your electric,” he told a laughing crowd at the Conservative Political Action Conference this month.