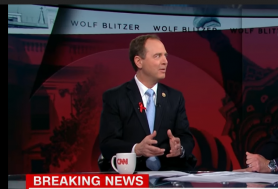 (Breitbart) Rep. Adam Schiff (D-CA) and the Democrats attempted Thursday to deny President Donald Trump’s claims of “Spygate” after they emerged from a bipartisan briefing about the FBI’s investigation into his 2016 campaign.

Following their lead, the mainstream media have labeled “Spygate” a “conspiracy theory” — even though Obama administration officials like former Director of National Intelligence James Clapper have admitted to the spying.

Schiff, the ranking member of the House Permanent Select Committee on Intelligence, emerged from Thursday’s briefing to read a statement on behalf of the Democratic Party leadership in Congress, attacking Trump’s claims:

“… Nothing we heard today has changed our view that there’s no evidence to support any allegation that the FBI or any intelligence agency placed a spy in the Trump campaign, or otherwise failed to follow appropriate procedures and protocols.”

That is the basis for claims like MSNBC’s “Trump’s nonsensical ‘Spygate’ conspiracy theory ends with a whimper.”

But a careful reading of Schiff’s statement reveals that he and Democratic leaders are attempting to fool the public.

First, it is important to note that Democrats, and the mainstream media, are disputing the term “spy.” They admit that there was an “informant” but refuse to allow the term “spy,” though in this context it means the same thing.

Second, note that Schiff said that Democrats merely said their “view”of the evidence has not changed. He did not say, nor could he, that “no evidence” existed as a matter of undisputed fact — because the evidence is already public…