AOC accuses president of running ‘concentration camps’ at the border… 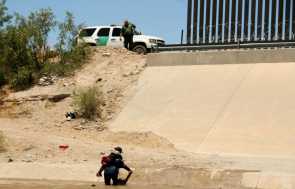 AFP/A Central American migrant and a girl cross the Rio Grande in Ciudad Juarez, Mexico, on June 12, 2019, before turning themselves into US Border Patrol agents to claim asylum

(AFP) Donald Trump‘s threat to begin deporting “millions of illegal aliens” next week triggered heated rhetoric Tuesday on both sides of America’s political divide, with Democrats warning the US president was fear-mongering ahead of his reelection campaign launch.

Liberal lawmaker Alexandria Ocasio-Cortez went so far as to accuse the Trump administration of operating “concentration camps” at the border, where a surge of migrants has all but overwhelmed US officials’ capacity to detain them.

Trump vowed to have US Immigration and Customs Enforcement (ICE) arrest and remove undocumented migrants “as fast as they come in” — a move that could disrupt thousands of families.

The comment thrusts the controversial issue to the fore as the Republican leader and his Democratic rivals ramp up their 2020 presidential campaigns.

The US is facing a surge in migrant arrivals from several Central American countries plagued by gang violence and poverty.

The numbers have smothered US authorities’ abilities to temporarily shelter and process them.

Trump has called it “an invasion,” and has made the fight against illegal migration a central plank of his administration.

The timing of his tweets, the night before kicking off his reelection campaign at what promised to be a rollicking Tuesday evening rally in Orlando, Florida, strongly suggests he is highlighting it as a theme of his 2020 bid.

Several Democrats, including those seeking to challenge Trump for the Oval Office, lobbed criticism at his comments and accused him of pandering to his conservative base. 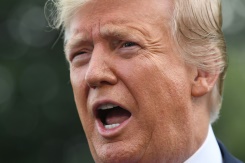 AFP/President Donald Trump ramped up his rhetoric about immigration a day before launching his re-election campaign, threatening to begin deporting “millions of illegal aliens” from the United States

House Speaker Nancy Pelosi, Trump’s chief Democratic rival in Congress, blasted the threat as “an act of utter malice and bigotry, designed solely to inject fear in our communities.”

And candidate Senator Kamala Harris said Trump’s threat could result in “a shameful stain” on the country.

Ocasio-Cortez sparked ferocious criticism from Republicans when she equated US actions on the border with Nazis rounding up Jews and others in the 1930s.

“The fact that concentration camps are now an institutionalized practice in the home of the free is extraordinarily disturbing, and we need to do something about it,” she said, as she denounced Trump’s “authoritarian and fascist presidency.”

She faced a swift rebuke by the third-ranking House Republican Liz Cheney, who urged her Democratic colleague to learn about the six million Jews exterminated in the Holocaust.

“You demean their memory and disgrace yourself,” Cheney tweeted.

An estimated 10.5 million unauthorized immigrants are living in the United States, according to the Pew Research Center.

With US lawmakers and the White House failing to reach agreement on how to stem unauthorized immigration, the contentious issue has simmered. 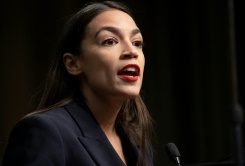 AFP/US Representative Alexandria Ocasio-Cortez has accused US authorities of operating “concentration camps” at the southern border, where thousands of migrants are in detention

Amid the squabbling, spiking arrival numbers at the US border with Mexico have threatened to spark a full-blown emergency.

Congress has authorized ICE to detain 40,000 migrants, and many others are sent to other overcrowded facilities across the nation.

The Trump administration is demanding billions of extra dollars from lawmakers to address the problem.

“This is a humanitarian crisis of gargantuan proportions. It needs to be dealt with,” warned Senate Majority Leader Mitch McConnell, as he urged Democrats cooperate with Republicans on extra funding.

The migrant surge has enraged Trump. This month, he used the threat of another trade war to pressure Mexico into doing more to stem the tide.

And on Monday, his administration said it would offer no more aid to El Salvador, Guatemala and Honduras unless they take “concrete actions” to deter undocumented migrants bound for the US.

Jorge Loweree — the policy director at the American Immigration Council, which seeks a more just immigration system — called Trump’s hardened deportation threat “political bluster” that could devastate millions of families with an undocumented parent, but would do little to address the border crisis.

Deportations have increased steadily — up 13 percent in fiscal year 2018 from the previous year, according to ICE.

The agency said it deported 256,086 people in the 2018 fiscal year, most of them convicted criminals.