Biden said McCain was “a hero whose character, courage and integrity helped inspire a nation”… 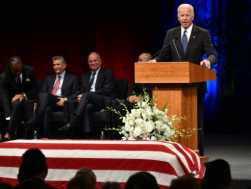 AFP / Robyn Beck
Former US vice president Joe Biden, speaking at a memorial in Phoenix, Arizona for his friend John McCain, eulogized the late senator as a “giant” who worked across party lines to advance the nation’s interests

(AFP) Former Vice President Joe Biden on Thursday eulogized late senator John McCain as an American “giant” whose belief in the soul of the country helped give citizens their confidence and optimism.

Biden led heartfelt tributes to the warrior and onetime Republican presidential nominee at a Phoenix memorial shortly before McCain’s remains were to be flown to Washington.

“My name is Joe Biden. I’m a Democrat. And I love John McCain,” he began as he praised his longtime Republican Senate colleague as “a giant among all of us,” a hero whose character, courage and integrity helped inspire a nation.

“The bottom line is, I think John believed in us,” said Biden, who occasionally wiped away tears as he recounted a friendship that marked a bygone-era of bipartisan cooperation in Washington.

“I always thought of John as a brother. We had a hell of a lot of family fights,” but their closeness transcended political differences, he added.

Some two dozen senators from both parties attended Thursday’s church ceremony, as did McCain’s children and wife Cindy, who wore black mourning dress.

Biden said there was something “intangible” about the national outpouring of grief over the passing of McCain, who has been critical of President Donald Trump.

“I think it’s because they knew John believed so deeply and so passionately in the soul of America. He made it easier for them to have confidence and faith in America,” Biden said.

Hundreds of Arizonans were seen lining the streets to pay final respects as McCain’s flag-draped coffin was then driven in a black hearse, escorted by four policemen on motorcycles, towards the airport for transport to Washington aboard a US military plane.

On Friday his remains will lie in state in the US Capitol, followed by a Saturday funeral service where former presidents George W. Bush and Barack Obama — each of whom defeated McCain in their races for the White House — will deliver remarks.

It is expected to be a fitting send-off for a political icon and former prisoner of war who came to epitomize respect, passionate debate and conciliation, especially in today’s climate of political division.

McCain, who died Saturday at 81 after a yearlong battle with brain cancer, will be buried Sunday at the US Naval Academy in Annapolis, Maryland.

Trump is not scheduled to attend the funeral services.