‘A real compromise in order to give another big victory to our Great Military and Vets!’…

(AFP) President Donald Trump said Monday that a “compromise” bipartisan budget agreement has been reached that will boost federal spending by $320 billion and suspend the debt limit beyond the next presidential election.

The deal, should it pass Congress as expected, would allow the federal government to borrow more money and avoid a disastrous default in the coming months, while significantly raising budget caps on defense and domestic outlays.

Trump tweeted that the deal was struck between the White House and the top Democratic and Republican leaders in both chambers of Congress “on a two-year Budget and Debt Ceiling, with no poison pills,” which could have otherwise derailed the legislation.

The agreement raises the discretionary spending caps for fiscal years 2020 and 2021, pairing it with a suspension of the statutory debt ceiling until the end of July 2021, nearly nine months after the 2020 election.

“This was a real compromise in order to give another big victory to our Great Military and Vets!” Trump added.

The agreement has faced resistance from conservative Republicans who oppose adding hundreds of billions of dollars in additional spending to the US debt.

Democratic leaders hailed it as a victory for securing robust funding for critical domestic priorities, describing the deal as the largest-ever increase in base funding above the so-called sequestration levels set forth in a 2011 law.

“With this agreement, we strive to avoid another government shutdown, which is so harmful to meeting the needs of the American people and honoring the work of our public employees,” House Speaker Nancy Pelosi and Senate Minority Leader Chuck Schumer said in a joint statement.

The deal assures that Washington remains on a borrowing binge, a significant setback for the White House’s stated goal of reining in expenditures.

Pelosi, the top Democrat in Congress, had been negotiating the deal with Treasury Secretary Steve Mnuchin, and the pair were racing against the clock to wrap it up by Friday, when the House of Representatives goes on a six-week recess.

Mnuchin warned last week that, barring an agreement, the government could run out of money in early September — before Congress reconvenes. 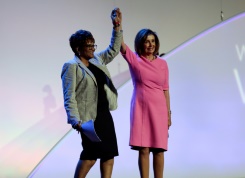 The compromise, with its boosted spending and narrow savings, is expected to push the annual budget deficit to more than $1 trillion next year.

Shortly before the deal was announced, David McIntosh, president of the conservative, pro-free-enterprise group Club for Growth, said Mnuchin “would best serve @realDonaldTrump if he insists on a better #spendingdeal that doesn’t bankrupt our country.”

Some conservatives in Congress also expressed discomfort with the extra red ink, especially given the soaring deficit.

The Democratic-led House goes on summer break July 26, but the Senate, controlled by Trump’s Republicans, is in session for an additional week.

Both Pelosi and Senate Majority Leader Mitch McConnell called on their chambers to pass the deal in the coming days and send it to Trump for his signature.

Officials have issued dire warnings that without an increase in the borrowing limit, the US could default on its debt for the first time and they have been urging the legislature to act.

Because the federal government traditionally runs a budget deficit, it has no choice but to borrow to finance government operations, including salaries, retirement benefits, social spending and other expenses already approved by Congress.