De Blasio, who has long opposed making recreational pot legal, now says he thinks legalization is inevitable and is creating an official task force to get ready for the day when that happens.

While pot remains illegal, de Blasio will direct the NYPD to give summonses to people officers catch smoking in public instead of arresting them, his aides said Sunday.

That policy change will be part of a 30-day review the mayor announced last week to address the massive racial disparity in marijuana arrests.

And de Blasio isn’t stopping there — he’ll put together a task force of city officials to lay the groundwork for full legalization, figuring out issues like how cops will deal with public smokers, what kind of zoning will be needed for pot dispensaries, and what types of public health campaigns the city should run about marijuana.

De Blasio isn’t quite throwing his support behind legalizing pot, but says the day is coming — whether he likes it or not — and the city should be ready.

“With marijuana legalization likely to occur in our state in the near future, it is critical our city plans for the public safety, health and financial consequences involved,” he said.

“While I still have real concerns we must work through, it isn’t difficult to see where this is headed, and any responsible policymaker must prepare for that eventuality. My focus now will be helping to craft the critical regulatory framework that must come before legalization is realized.”

City Hall is acting because they believe Gov. Andrew Cuomo is likely to act soon to make the drug legal in New York state.

But he has shifted his position, appointing a commission to study the issue and saying the availability of legal pot in surrounding states has changed the equation for New York.

More and more New York pols have gotten on board with legalizing weed in recent weeks, and the city has faced a torrent of criticism over the racial disparity in NYPD arrests.

Research shows white and black people smoke pot at about the same rate, but 86 percent of those arrested in the city are black and Latino.

The NYPD first argued they were making arrests in neighborhoods where residents call to complain about pot smoking — but as the New York Daily News first reported, data on 311 and 911 calls show the areas with the most calls and the most arrests do not match up. 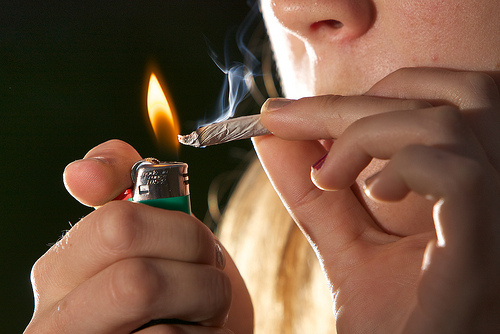 De Blasio previously loosened marijuana enforcement early in his first term, directing police to give summonses instead of arresting people found with the drug in their possession. But people who are smoking it in public still face arrest.

Last week, de Blasio promised to “overhaul and reform” the enforcement policy, but gave no details.

Now, the mayor’s office says the city will be moving to summonses instead of arrests for smoking as well. It’s unclear when the new arrest policy will take effect.

The NYPD is also expected to come up with other initiatives to address the racial disparity, but those have not been determined yet.

De Blasio’s task force, made up of officials from various city agencies, aims to have policies in place when pot does become legal on education, small-business engagement and economic fairness, in addition to policing and the siting of pot distribution facilities.