‘We request that you produce documents relating to whether Mr. Bolton reported his previous work with this alleged Russian spy on his security clearance forms…’ 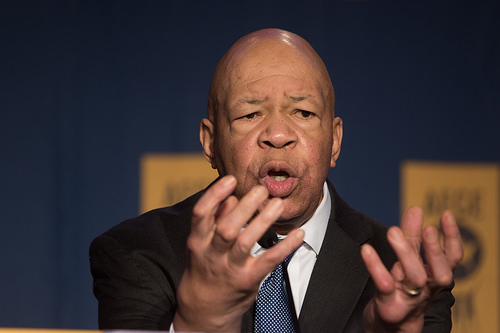 Bolton appeared with Butina in a video round-table discussion about gun rights, reportedly sponsored by the Russian organization Right to Bear Arms, in his previous position as a top National Rifle Association official.

“Given the alarming and unprecedented nature of these revelations—and the high-level position of trust Mr. Bolton now holds—we request that you produce documents relating to whether Mr. Bolton reported his previous work with this alleged Russian spy on his security clearance forms or other White House vetting materials prior to President Trump appointing him to his current position,” Cummings and Lynch wrote.

Bolton, who was a George W. Bush-era ambassador to the United Nations, played a key role as a liaison in Trump’s much ballyhooed summer meeting with Russian president Vladimir Putin.

Butina was charged in July by federal prosecutors with infiltrating the National Rifle Association and spying on the United States. Her arrest, along with Special Counsel Robert Mueller and Deputy Attorney General Rod Rosenstein’s indictment of 12 Russians responsible for hacking the Democratic National Committee prior to the 2016 election, became key talking points at the summit in Finland.

In the video, Bolton expressed support for amending the Russian constitution to include broader gun rights and offered the Russian people, “encouragement as you consider embracing that freedom,” the Democrats wrote in the letter.

Bolton reportedly participated at the request of then-NRA President David Keene. Keene had appointed Bolton to lead the NRA’s Subcommittee on International Affairs in 2011.

In order to get access to classified information, government officials must provide a wide range of information about their contacts with foreign citizens, foreign business and professional activities, foreign government contacts, and any advice they provided or consultancy arrangements they had with foreign entities, according to a news release from Cummings’ office.

Applicants also typically provide additional information directly to the Executive Office of the President as part of their applications for employment at the White House.

The letter requested several categories of documents and information provided by Bolton on his security clearance forms and other White House vetting materials.