‘I thought he was going to kiss me on the mouth…’ 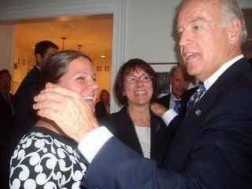 (Neil Vigdor, The Hartford Courant) A Connecticut woman says Joe Biden touched her inappropriately and rubbed noses with her during a 2009 political fundraiser in Greenwich when he was vice president, drawing further scrutiny to the Democrat and his history of unwanted contact with women as he ponders a presidential run.

“It wasn’t sexual, but he did grab me by the head,” Amy Lappos told The Courant Monday. “He put his hand around my neck and pulled me in to rub noses with me. When he was pulling me in, I thought he was going to kiss me on the mouth.”

Lappos posted about the alleged incident on the Facebook page of Connecticut Women in Politics Sunday in response to a similar account by former Nevada legislator Lucy Flores, which comes as Biden is considering a 2020 run for president. Flores accused Biden of kissing her on the back of her head in 2014, when she was a candidate for lieutenant governor.

Lappos, 43, who is now a freelance worker with nonprofit agencies, said she felt extremely uncomfortable when Biden approached her at the 2009 fundraiser for U.S. Rep. Jim Himes, D-4th, where she was volunteering. At the time, Lappos was a congressional aide to Himes, who she said was not in the room when the incident took place.

“I never filed a complaint, to be honest, because he was the vice president. I was a nobody,” Lappos said. “There’s absolutely a line of decency. There’s a line of respect. Crossing that line is not grandfatherly. It’s not cultural. It’s not affection. It’s sexism or misogyny.”

A spokeswoman for Biden declined to respond to the allegations by Lappos and instead offered a statement that Biden issued Sunday about the Flores controversy.

“In my many years on the campaign trail and in public life, I have offered countless handshakes, hugs, expressions of affection, support and comfort. And not once — never — did I believe I acted inappropriately,” Biden said. “If it is suggested I did so, I will listen respectfully. But it was never my intention. I may not recall these moments the same way, and I may be surprised at what I hear. But we have arrived at an important time when women feel they can and should relate their experiences, and men should pay attention. And I will.”

Himes, who is in his sixth term as the congressman for southwestern Connecticut, said he first learned Monday about the allegation by Lappos and was not prepared to immediately comment.

Biden spoke for about 20 minutes outside the home on a terrace, which was open to the media. Reporters were not allowed inside the house, which is where Lappos said the incident took place. Lappos appeared in three photos with Biden at the event, which she said were taken after his remarks and before the incident. She said she was in the kitchen with four to five other volunteers, when Biden moved toward her.

In her Facebook post, Lappos used the pseudonym Alice Paul, the suffragist who championed the 19th Amendment giving women the right to vote and the Equal Rights Amendment, to discuss her exchange with Biden.

“Biden did something similar to me at a fundraiser in Greenwich when I was a congressional aide,” Lappos wrote in her Facebook post. “I’m really disappointed to see this (Facebook) post ask ‘thoughts’ as if the grossness of men invading women’s boundaries to sniff and touch is debatable. And shame on some of the women here excusing this as boys being boys or it’s not as bad as Trump. I can speak from experience when I say it’s an incredibly uncomfortable situation and not at all acceptable. We need to hold our men to the same standards we hold all men.”

Lappos said that Democrats cannot condone Biden’s behavior and anoint him as a presidential candidate while at the same time condemning President Donald Trump for his sexist treatment of women.

“If Biden truly supports women and gender equality he would step aside and support one of the many talented and qualified women running,” she said. “The same goes for the other men who have thrown their hat in the ring. Women are 52 percent of the population. We are not a minority, we are the majority. It is time we are represented as such. After 45 male presidents it is time we elect a woman.”

Biden said in his statement Sunday that he has a strong record of supporting women.

“I will also remain the strongest advocate I can be for the rights of women,” Biden said. “I will fight to build on the work I’ve done in my career to end violence against women and ensure women are treated with the equality they deserve. I will continue to surround myself with trusted women advisers who challenge me to see different perspectives than my own. And I will continue to speak out on these vitally-important issues where there is much more progress to be made and crucial fights that must be waged and won.”