(Paul Chesser, Liberty Headlines) A conservative organization, which regularly utilizes shareholder activism to call attention to public companies’ support for liberal causes, plans to single out Coca-Cola this week for its opposition to religious liberty legislation in Georgia. 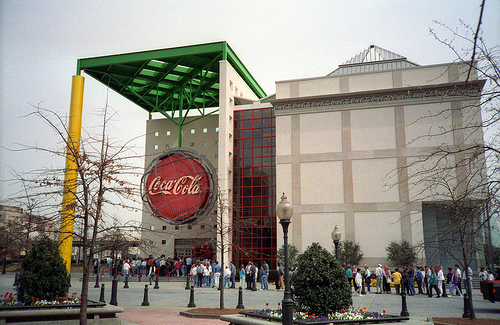 The Free Enterprise Project, through which the National Center for Public Policy Research holds corporations accountable for their political activities, announced Monday it will introduce a shareholder resolution at the company’s annual meeting on Wednesday at its World of Coca-Cola attraction in Atlanta. Last year the soft drink giant joined hundreds of other corporations in an effort they called “Georgia Prospers,” which was formed to oppose legislation that would protect the rights of individuals and businesses to practice their religion. The measure would have enabled citizens — including ministers — to cite religious conscience objections to accommodate homosexual couples, if their faith doesn’t recognize same-sex “marriages.”

But NCPPR says Coca-Cola applies a moral standard to the State of Georgia — which also hosts its headquarters — that it does not require of many other governments around the world where Coke is manufactured, distributed or sold. National Center vice president David Almasi plans to call attention to the company’s hypocrisy via FEP’s shareholder resolution.

“Coca-Cola operates in countries where governments consider homosexuality a crime,” Almasi said in a statement. “Yet it allied with a radical pressure group, Georgia Prospers, to stop the Peach State’s religious freedom bill it falsely claimed persecuted homosexuals.”

FEP says it will ask its fellow Coca-Cola investors to vote for its resolution, which calls for the board of directors to “review the company’s guidelines for selecting countries/regions for its operations and issue a report. . . [to] identify Coca-Cola’s criteria for investing in, operating in and withdrawing from high-risk regions.”

FEP says the resolution is the only one scheduled for consideration that isn’t offered by the company itself.

Coca-Cola is in nearly every nation in the world — communist, capitalist or otherwise. Its soft drinks are packaged locally everywhere, but in some cases it wants to give the impression that it works with “bottling partners” which “the Company does not own or control.” But it does own and operate bottling operations in at least 17 countries.

“[Coca-Cola’s Bottling Group] currently employs more than 40,000 people and operates in four continents,” the company explains on its Web site. “Its revenues have increased from $11 billion in 2004 to over $20 billion in 2015.”

And that’s just the packaging operations. Among those nations where it bottles its own products are Qatar and United Arab Emirates, where homosexuality may be punished by death. Other oppressive nations are in the Coke business as well, yet there is little record of Coca-Cola signing on with corporate coalitions to demand that those national governments cease and desist from their discriminatory — and sometimes deadly — actions against gays.

“By opposing Georgia’s religious freedom legislation, Coca-Cola opposed the kind of protections inherent in our nation’s founding principles and later advocated by the likes of Ted Kennedy,” said Almasi. “Yet the company does business in the UAE, Saudi Arabia, Nigeria and other places where homosexuality is discriminated against to the extent it is punishable by death.”

In Georgia, Republican Gov. Nathan Deal vetoed the religious freedom legislation in March 2016 after it passed both chambers of the state legislature. A slimmer version of the proposal — which simply requires Georgia to similarly apply the federal Religious Freedom Restoration Act — has been introduced for 2017. As the Atlanta Journal-Constitution reported, “the law requires the government to prove a ‘compelling governmental interest’ before it interferes with a person’s exercise of religion.”

Yet Coca-Cola, by its actions, only wants to intervene on behalf of special set-aside rights for homosexuals and against religious conscience in Georgia, but nowhere else.

“If Coca-Cola wants to go after religious Americans, it’s no longer going to do so with impunity,” said Justin Danhof, executive director of NCPPR’s Free Enterprise Project. “Either the company is opposed to religious freedom everywhere, or it only opposes religious freedom here in the United States as a means to score political points with the anti-religious left. If the company were to honestly answer our proposal, all Coca-Cola investors would know if the company was truly anti-religious or simply hypocritical for political reasons.”