The Washington Post greeted the Trump presidency by posting a new motto on the front page each day: “Democracy Dies in Darkness…” 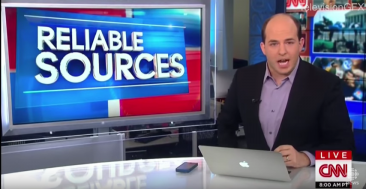 On the Monday before Independence Day, the news network morning shows led with the oppressively hot weather.

The normal feverish panic about living in Donald Trump’s America was missing for a few hours.

Stelter claimed to speak for the crowd when he began asking: “Are we living through a national emergency? And if so, how in the heck should journalists be covering it that way?”

Baron replied that it isn’t his place to answer that. His newspaper’s role “is to cover very aggressively this administration as we would cover any other administration.” He claimed, “We’re not in the business of sort of characterizing the era.”

The Post greeted the Trump presidency by posting a new motto on the front page each day: “Democracy Dies in Darkness.” It sells T-shirts with the motto to other liberals.

By contrast, during Barack Obama’s presidential transition in 2009, the Post promoted to national editor a journalist who wrote gushy captions for a coffee-table book titled “Obama: The Historic Campaign in Photographs.”

Most Americans would suggest that the Dow Jones Industrial Average being up 5,000 points since President Trump’s inauguration and the unemployment rate being 3.8 percent is not a national emergency.

But then again, most Americans aren’t journalists…