(Gateway Pundit) A video released a day after the Islamic terror attacks in London show a CNN crew staging a scene with Muslims holding signs saying “ISIS Will Lose”.

The following is a screenshot of the signs: 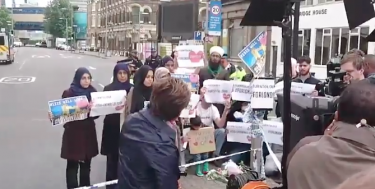 The same crowd was used for the following AP post it appears – note the man with green around his neck in both pictures. This is how fake news spreads.

My message to the #LondonBridge attackers: You are a handful of twisted fools hell-bent on taking lives https://t.co/0v17H67El1

Below is a video of the behind-the-scenes work CNN did to stage the photo-op with Muslims holding up signs that read, ‘ISIS WILL LOSE’…