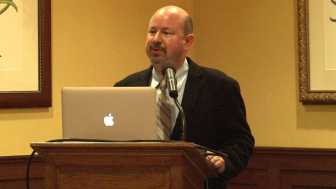 Mann’s explanation, however, goes against the prevailing evidence of global warming’s measured impacts on storms. Many climate scientists have been careful not to tie individual weather events to manmade warming.

“I’m sure you won’t be surprised to hear people blaming Harvey on global warming,” climate scientist Judith Curry wrote in a recent blog post. “How unusual was Harvey? Well, it will definitely be in the record books for ending the 12 year drought of major hurricanes striking the U.S.”

“Anyone blaming Harvey on global warming doesn’t have a leg to stand on,” Curry wrote.

Harvey made landfall as a Category 4 hurricane over the weekend, causing massive flooding. Harvey quickly weakened to a topical storm, but it still dumped more than 9 trillion gallons of water over southeastern Texas. Rescuers have evacuated thousands of people from flooded homes, and at least six people have died.

Federal, state and local authorities are working to get more people to safety and coordinate a disaster response to the catastrophic flooding. Disaster aid is pouring in from other states and charity groups, like the Red Cross, are out in force. Rains are expected to continue through Friday.

While Texans struggle to rebuild their lives, many in the media and science community are the debating the extent to which Harvey can be blamed on manmade global warming. Mann is one of the scientists that say storms, like Harvey, can be linked to a warming climate.

“There are certain climate change-related factors that we can, with great confidence, say worsened the flooding,” Mann wrote in a Facebook post Sunday as Harvey stalled over eastern Texas, dumping trillions of gallons of water on major cities.

“Sea level rise attributable to climate change is more than half a foot over the past few decades,” Mann wrote. “That means that the storm surge was a half foot higher than it would have been just decades ago, meaning far more flooding and destruction.”

“Temperatures in the area where Harvey intensified were 0.5-1C warmer than current-day average temperatures, which translates to 1-1.5C warmer than the ‘average’ temperatures a few decades ago,” Mann wrote. “That means 3-5% more moisture in the atmosphere.”

“That large amount of moisture meant the potential for much greater rainfalls and greater flooding,” Mann added. “The combination of coastal flooding and heavy rainfall is responsible for the devastating flooding that Houston is experiencing. So Harvey was almost certainly more intense than it would have been in the absence of human-caused warming, which means stronger winds, more wind damage, and a larger storm surge. Climate change worsened the impact of Hurricane Harvey.”

“Although these storms occur naturally, the storm is apt to be more intense, maybe a bit bigger, longer-lasting, and with much heavier rainfalls [because of that ocean heat],” Kevin Trenberth, a climate scientist at the U.S. National Center for Atmospheric Research, told The Atlantic.

PREVIOUSLY: Al Gore Contradicts Past Predictions of Doom and Gloom

However, Mann and Trenberth may be overplaying their hands.

Scientists expect global warming to make storms more frequent and intense, but, so far, there’s been little to no evidence that’s actually happening. The Intergovernmental Panel on Climate Change (IPCC) noted in their last major report found “no significant observed trends in global tropical cyclone frequency over the past century.”

National Oceanic and Atmospheric Administration found in March 2017 that it’s “premature to conclude that human activities — and particularly greenhouse gas emissions that cause global warming — have already had a detectable impact on Atlantic hurricane or global tropical cyclone activity.”

“Harvey will be in the record books for almost unbelievable amounts of rainfall,” Curry wrote. “While there was a large amount of water vapor ingested into Harvey, the huge amounts of rain are associated with Harvey’s stalled movement, while still close enough to the Gulf to continue to suck in moisture.”