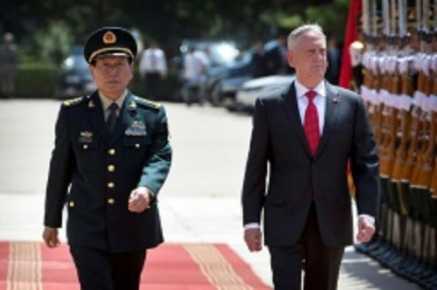 (AFP, Mark Schiefelbein)
US Defence Secretary Jim Mattis (R) and China’s Defence Minister Wei Fenghe are seen during a visit by Mattis to Beijing on June 27, 2018

“I would just point out that (our) strategic competition does not imply hostility,” Mattis said at a Middle East security conference in Bahrain, in response to a question about tensions.

“I have met with my counterpart in Beijing a month ago, I have met with him again in Singapore a week ago. He is coming to Washington next week to continue our discussions,” Mattis added.

But in early October, a US defence official said that a planned visit by Mattis to China had been cancelled, because Beijing declined to make General Wei available.

The cancellation came amid military tensions and an escalating dispute between the two countries over tariffs.

Beijing also rebuked Washington for its “provocative” flights of bombers over the South China and East China seas.

It also criticized US arms sales to Taiwan, nixed a planned visit by a US warship to a Hong Kong port and cancelled a meeting between the head of the Chinese navy and his American counterpart.

“I will tell you that we are committed to cooperating with China, with Russia, where we can,” Mattis said on Saturday.

The US justifies naval deployments in the South China Sea on the grounds of “freedom of navigation”, causing tensions with Beijing, which claims large parts of the maritime area.